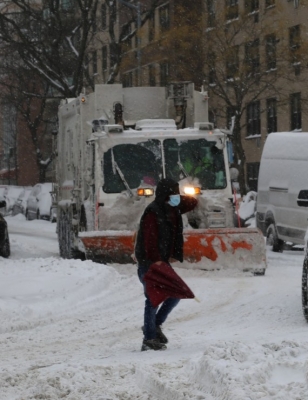 New York– At least four people died over the weekend as a blizzard swept through parts of the US East Coast.

Three of the dead were found in the snow next to their shovels on Long Island, New York, on Saturday, while a snow plough driver found an elderly woman dead inside her vehicle overnight in Uniondale, also on Long Island, Xinhua news agency reported citing local media as saying on Sunday.

At least a foot of snow fell in nine states from Maryland to Maine on Saturday, with the heaviest amounts near coastal areas.

Boston, was in the crosshairs, seeing record-tying single-day snowfall from the winter storm, with 23.6 inches falling on Saturday.

Mayor Michelle Wu said on Sunday that cleanup efforts are well underway in Boston and that schools will be open on Monday.

There are still more than 11,000 households in Massachusetts left without power as of Sunday evening, according to power outage tracking site poweroutage.us.

The total number of flight cancellations within, into, or out of the US reached nearly 1,500 of Sunday evening, data from flight-tracking website FlightAware.com showed.

More than 2,600 US-related flights were delayed.

The blizzard was produced by a bomb cyclone that formed on Saturday.

The large, intense midlatitude storm has low pressure at its centre and an array of associated weather, from blizzards to severe thunderstorms to heavy precipitation, according to the country’s national weather authority. (IANS)