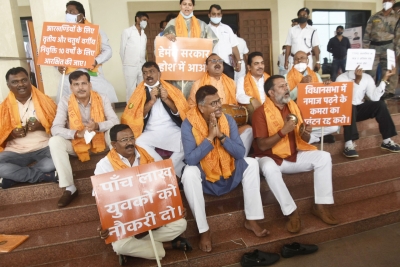 Ranchi– BJP legislators chanted ‘Jai Sri Ram’, ‘Har Har Mahadev’ inside the Jharkhand Assembly on Monday to protest against the allocation of a room by the Speaker for offering Namaz during the Assembly session.

“The Assembly will function only when the Speaker revokes his order to allocate a separate room for offering Namaz in the Assembly,” a BJP legislator said.

The ruling Jharkhand Mukti Morcha and the Congress termed the BJP’s act as driven by politics.

“A separate room has been allocated for offering Namaz during Assembly session. The BJP should not do politics over faith,” said a Congress legislator.

The BJP legislators also sang bhajans on the Assembly campus before the session commenced.

“A party adopts such methods when it has no issue or agenda. If there is faith in the mind, god is everywhere. But when demon prevails in the mind, a person sees opponents everywhere,” the Chief Minister said.

On September 2, Speaker Rabindra Nath Mahto had issued an order allocating a separate room for offering Namaz during the Assembly session.

To protest the Speaker’s move, the BJP has demanded a separate room for reading Hanuman Chalisa.

“The state government has adopted an appeasement policy. There are many mosques within 1 km radius of the state Assembly. So why allocate a separate room for offering Namaz. It is a wrong precedent set by the JMM government,” said Biranchi Narayan, a BJP legislator. (IANS)