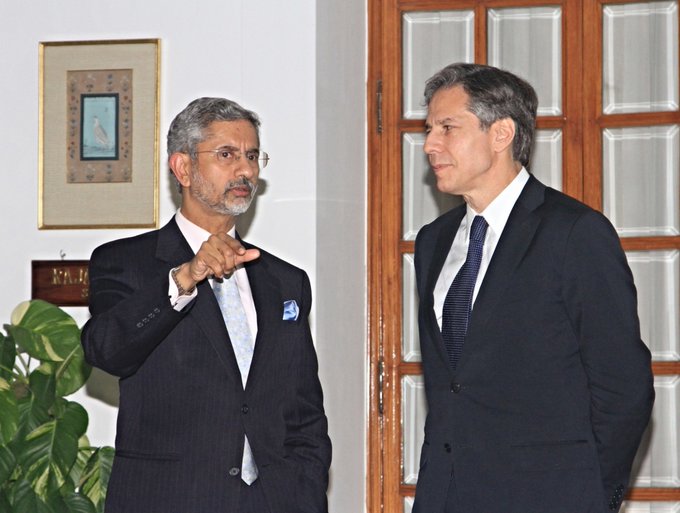 New York–Antony Blinken, who has said that strengthening ties with India would be a “high-priority” in a new administration, has been designated for the post of secretary of secretary by Joe Biden.

Making the announcement of key foreign policy and national security designees on Monday, Biden said, “We have no time to lose when it comes to our national security and foreign policy. I need a team ready on Day One to help me reclaim America’s seat at the head of the table, rally the world to meet the biggest challenges we face, and advance our security, prosperity, and values.”

Kamala Harris, who will be the vice president, described Blinken as “crisis-tested” and among the “best of America.”

Blinken, who was the deputy secretary of state in the administraiton of former President Barack Obama, said during the presidential campaign that from “Biden’s perspective, strengthening and deepening the relationship with India is going to be a very high priority.”

An important designation was that of former Secretary of State John Kerry as the special presidential envoy for climate and as a member of the National Security Council, highlighting the high-level of importance Biden places on the environment.

A close adviser to Biden, Jake Sullivan has been designated for the national security Advisor post. He had been national secretary advisor to Biden when he was the vice president.

Avril Haines, who was designated for the director of national intelligence, will become the first woman to head the intelligence community.

She is a former deputy director of the Central Intelligence Agency and deputy national security advisor and had worked with Biden when he chaired the Senate Foreign Relations Committee.

Alejandro Mayorkas is the designee for Secretary of Homeland Security, the first Latino to hold the post if confirmed by the Senate.

For permanent representative to the United Nations, Biden has designated Linda Thomas-Greenfield, who will get a cabinet rank. She is a former assistant secretary of state in charge of Africa.

Harris said, “These crisis-tested national security and foreign policy leaders have the knowledge and expertise to keep our country safe and restore and advance America’s leadership around the world. They represent the best of America.”

Biden choice of key staff is limited by the possibility that the Republicans may continue to control the Senate, which will have to approve cabinet-level appointments and some others like the CIA head. His nominees will, therefore, have to be moderates to get the votes of some Republicans.

Blinken is considered closer to the centre.

He has met with External Affairs Minister S. Jaishankar when he was the foreign secretary and Blinken was the deputy secretary of state.

India is “fair, stable, and hopefully increasingly democratic and it’s vital to being able to tackle some of these big global challenges,” Blinken said in July while speaking at the Hudson Institute, a conservative think tank.

“It’s usually important to the future of the Indo-Pacific and the kind of order that we all want,” he said affirming President Donald Trump’s emphasis on the region as a counterbalance to China.

He spoke of the differences Biden has with India over Kashmir and the Citizenship Amendment Act, which gives priority for citizenship to Christians, Buddhists and Sikhs fleeing persecution in neighbouring Muslim countries.

Rather than the punitive actions advocated by some in the Democratic Party, Blinken said at the Hudson Institute, “You’re always better engaging with a partner and a vitally important one like India, when you can speak frankly and directly about areas where you have differences even as you’re working to build greater cooperation and strengthen the relationship going forward.”

“That would be the approach and again, I think we’ve seen evidence that it works,” he said.

But that would still be an irritant in the relations between the two democracies.

Biden is taking a broader view of international relations integrating the strategic aspects of issues like climate change, for which he has given high priority.

Blinken was a key figure in the Paris climate negotiations that produced the landmark agreement on fighting global warming.

He said that US team with Biden “worked hard to persuade India that it would be more prosperous and more secure if it’s signed on to the Paris Climate Agreement. We succeeded. It wasn’t easy.”

Trump pulled out of the Paris pact, which Biden has vowed to rejoin. (IANS)