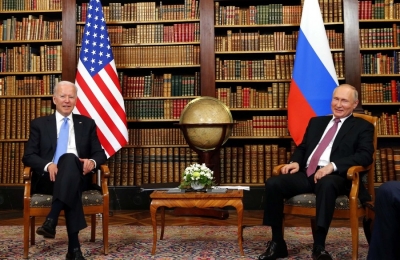 Washington/Moscow–In a year-end phone call, US President Joe Biden urged his Russian counterpart Vladimir Putin to de-escalate tensions with Ukraine, while making it clear that Washington and its allies will “respond decisively” if Moscow “further invades” Kiev.

In a statement, White House Press Secretary Jen Psaki said that during the call on Thursday, the US President also expressed support for diplomacy, starting early next year with the bilateral Strategic Stability Dialogue, at NATO through the NATO-Russia Council, and at the Organization for Security and Cooperation (OSCE) in Europe.

“President Biden reiterated that substantive progress in these dialogues can occur only in an environment of de-escalation rather than escalation,” Psaki added.

A senior administration official said the “tone of the conversation between the two Presidents was serious and substantive” and they also discussed the importance of “pragmatic, results-oriented diplomacy”.

On it part, the Kremlin said Biden and Putin “discussed agreements reached during their previous consultations on December 7, including the decision to launch negotiations on the provision of legal guarantees aimed at ensuring Russia’s security”.

It was emphasized that the outcome of joint cooperation should yield legal guarantees against NATO’s eastward expansion and the alliance’s deployment of weapons systems near Russia’s borders.

Putin and Biden agreed on the importance of serious and meaningful dialogue on these matters, and confirmed that upcoming security talks between Moscow and Washington would be carried out in three formats.

The first round of negotiations will take place in Geneva on January 9-10, 2022. They will later continue in Brussels within the framework of the NATO-Russia Council on January 12, and within the OSCE on January 13.

During the talks, Putin noted that imposing wide-ranging sanctions against Moscow in case of a possible escalation of events would be a “grave mistake” and could lead to a major “rupture in Russia-US ties”, the Kremlin said.

Both Presidents agreed to continue the dialogue and closely monitor all upcoming negotiations.

“In general, the conversation was frank and businesslike. It was useful to both parties,” the Kremlin added.

During their first in-person summit in Geneva on June 16 when US-Russia relations were at their lowest point in years, the two leaders discussed issues including strategic stability and cybersecurity.

Despite a lack of breakthroughs during their meeting and many remaining contradictions, their consultations back then demonstrated that both sides were willing to launch a dialogue with the aim of preventing a further escalation of tensions.

At another virtual summit on December 7, they discussed the situation in Ukraine, the Iran nuclear deal, cybersecurity, and bilateral ties, among other issues. (IANS)