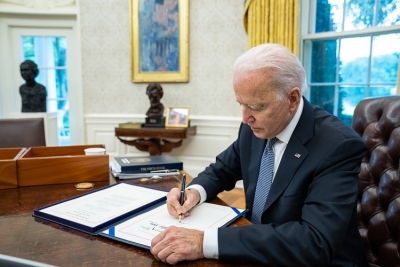 Washington– US President Joe Biden has signed the law to ban Chinese tech companies like Huawei and ZTE from getting approval for network equipment licences in the country.

The ‘Secure Equipment Act of 2021’ had received bipartisan support prior to it being signed by the President, ZDNet reported on Friday.

Last year, the Federal Communications Commission (FCC) designated Huawei and ZTE as national security threats to communications networks — making it harder for US firms to buy equipment from them.

Under the new law, the FCC is required to no longer review or approve any authorisation application for equipment posing a clear risk to national security.

FCC Commissioner Brendan Carr had made repeated calls for the legislation to be passed since March this year.

“Once we have determined that Huawei or other gear poses an unacceptable national security risk, it makes no sense to allow that exact same equipment to be purchased and inserted into our communications networks as long as federal dollars are not involved. The presence of these insecure devices in our networks is the threat, not the source of funding used to purchase them,” Carr had said.

In June this year, Biden signed an executive order that increases the number of restricted Chinese firms from 48 to 59, expanding a Donald Trump-era ban on Chinese surveillance companies with alleged ties to the military.

In October, the FCC Commissioner had warned that Chinese drone maker DJI “is collecting vast troves of sensitive data on Americans and US critical infrastructure, potentially operating as Huawei on wings”.

Shenzhen-based DJI accounts for more than 50 per cent of the US drone market. (IANS)