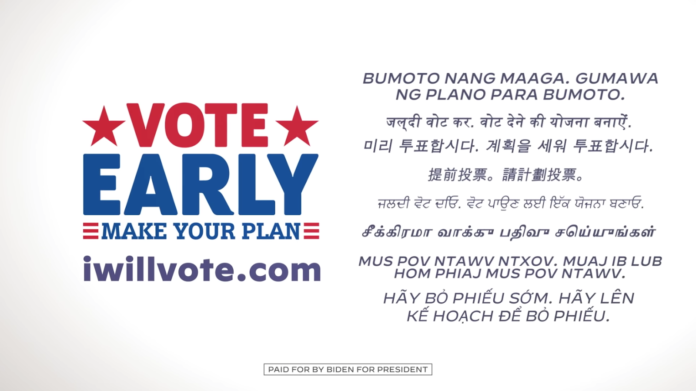 BOSTON–Biden for President is launching a new digital ad targeting Asian American and Pacific Islanders (AAPI) in key battleground states highlighting the diversity of the community, and the shared values among AAPI voters.

The spot — produced in-house by a team of creatives, producers and editors, all of whom are AAPI women — includes messages of unity, family, and values that aim to mobilize AAPI communities to vote in the final stretch of the campaign.

Watch the full ad HERE.
Featuring user-generated content from campaign staff, supporters and others, the ad will run on Youtube and Facebook in nine battleground states including Arizona, Florida, Michigan, Minnesota, Nevada, North Carolina, Pennsylvania, Virginia, and Wisconsin.“English is not the primary language for many eligible AAPI voters, so we wanted to speak with them respectfully in their mother tongue,” said Yena Oh, Biden for President Senior Video Editor and Korean-American. “We know how important it is to resonate and engage with our own community where they are — across different platforms using multiple languages.”

The new digital ad is part of a larger paid media campaign targeting AAPI communities launched earlier this month, which includes television, digital, radio, and print ads designed to engage persuadable voters, and mobilize members of the AAPI community in support of Joe Biden and Kamala Harris. The campaign includes targeted ads in local ethnic media, allowing the campaign to reach AAPI voters, especially those who the campaign may not be able to reach through traditional voter outreach efforts.

The AAPI targeted campaign is currently running nationally on radio, digital and print platforms, as well as platforms in Arizona, Florida, Michigan, Minnesota, Nevada, North Carolina, Pennsylvania, Texas, Virginia, and Wisconsin. The Biden for President paid media program is active in a total of 16 states — including the above states in addition to Georgia, Iowa, Maine, Nebraska, New Hampshire, and Ohio.