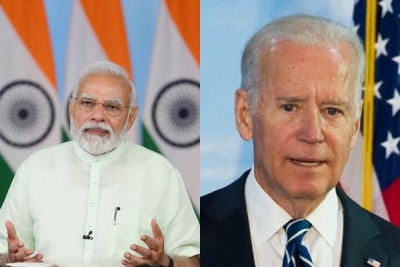 New York–Downplaying the differences between India and the US on the approaches to the Russian invasion of Ukraine, US President Joe Biden began his virtual summit with Prime Minister Narendra Modi on Monday by highlighting India’s humanitarian assistance to Ukraine.

“I want to welcome India’s humanitarian support to the people of Ukraine. We’re going to continue our close consultation on how to manage the destabilising effects of this Russian war,” Biden said.

Modi spoke of India’s relief supplies to Ukraine and condemned the killings of civilians in Bucha, which he called “very worrying”, adding that the Parliament had extensive discussions on Ukraine.

“We have sent medicines and other relief materials to Ukraine and to its neighbouring countries, and on Ukraine’s request, we will be sending them another consignment of medicines very soon,” Modi said.

“Recently, the news about the killings of innocent civilians in Bucha was very worrying. We have instantly condemned the killings and have called for an independent inquiry,” he said, speaking in Hindi with simultaneous interpretation in English.

Modi said the summit “is very important as it will provide direction for discussions” at the 2+2 meeting.

At the White House, Biden sat at a semi-circular table with the US secretaries to his right and Indian ministers and Ambassador Taranjit Singh Sandhu to his left, facing Modi on a video screen.

While ending his introductory remarks, Biden, who is known for his several slips of the tongue, addressed Modi as “Mr President” although elsewhere during the brief speech he called him the Prime Minister.

The media that was in the room to watch the start of the summit was not allowed to ask questions and was ushered out even as they were shouting questions.

Before the summit, Blinken and Jaishankar, and Austin and Singh, held separate bilateral meetings.

Austin welcomed Singh to the Pentagon with an honour guard.

India has stayed mostly neutral on the Russian invasion of Ukraine, abstaining eight times on Ukraine-related voting at the United Nations.

This and India buying oil from Russia have led to criticism of India in the US and suggestions of imposing sanctions, even though energy purchases are allowed under the US sanctions and European US allies continue to buy far higher amounts of energy from Moscow.

The Biden administration has tried to ward off criticism of India, which is a key player in its global strategy.

“Our continued consultation and dialogue are key to ensuring the US-India relationship continues to grow deeper and stronger, delivering our people and our global good, good that we all are seeking, managed particularly in your part of the world”, Biden said.

Modi recalled that at their meeting in September, Biden had said “that the India America partnership can contribute to solving a lot of global problems”.

“I totally agree with you. As two democracies that are the world’s largest and oldest, we are natural partners and progress that has taken place in our relations in the last few years, the new momentum that has been created, would have been hard to even imagine a few decades ago,” Modi said.

Stressing the democracy link, Modi said, “At the beginning of your term in office, you used to use the very important slogan, ï¿½Democracies can deliver’. India-America partnership and its success is the best means to make the slogan meaningful this year.”

On US’ ties with India, Biden said, “We have the same concerns about the global challenges we faced with Covid-19. Advancing health security and tracking the climate crisis, and we share a strong and growing major defence partnership.

“And our partnership is a deep connection between our people ties of family, of friendship and of shared values.” (IANS)