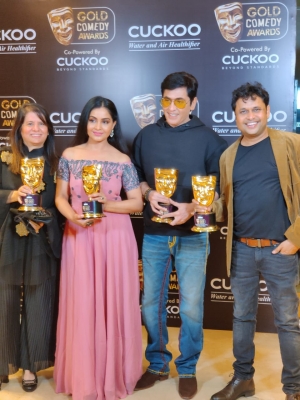 On receiving the Best Actor award, Aasif Sheikh said: “I am grateful and delighted for this recognition. It truly means a lot. It feels great to see how the character of Vibhuti has etched a special place in the audience’s heart and continues to be their absolute favourite. Vibhuti is nothing without the team behind him.”

Winning the Best Actress award, Shubhangi Atre shared: “Nothing is as great as getting recognised for your hard work. I am thankful to the makers and the whole team for making Angoori a beloved character. Such achievements motivate us as artistes to work harder and continue on our efforts to do something different and entertain people.”

Expressing his excitement on receiving the Best Supporting Actor award, Yogesh Tripathi added: “This award is an honour and a privilege for an iconic show like ‘Bhabiji Ghar Par Hai’. I thank our producers, Sanjay Ji and Binaiferr Ji for this, the cast and crew and my beloved fans.”