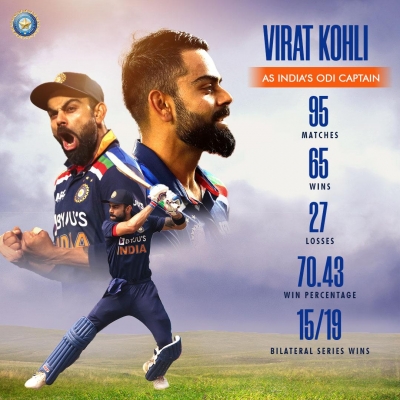 New Delhi– A day after replacing him with Rohit Sharma as India’s ODI captain, the BCCI on Thursday thanked Virat Kohli for leading the team with “grit, passion and determination” during his four year tenure.

“A leader who led the side with grit, passion & determination. Thank you Captain @imVkohli!” the board tweeted along with the picture featuring Kohli’s captaincy stats in the 50-over format.

Kohli, who took over limited-overs captaincy from MS Dhoni in 2017, has been one of India’s most successful white-ball captains. In 95 ODIs, he won 65, giving him an admirable winning percentage of 70-plus. In 45 T20Is, he led India to victory 27 times.

The star batter relinquished T20 captaincy at the end of the 2021 T20 World Cup where India failed to reach the knockout stages.

Sharma has been Kohli’s longstanding deputy in white ball cricket and his first assignment as India’s limited overs captain was the recent three-match T20 series against New Zealand at home last month, which the team won 3-0.

He will now lead India in the South Africa ODI series, the squad for which is yet to be announced. (IANS)