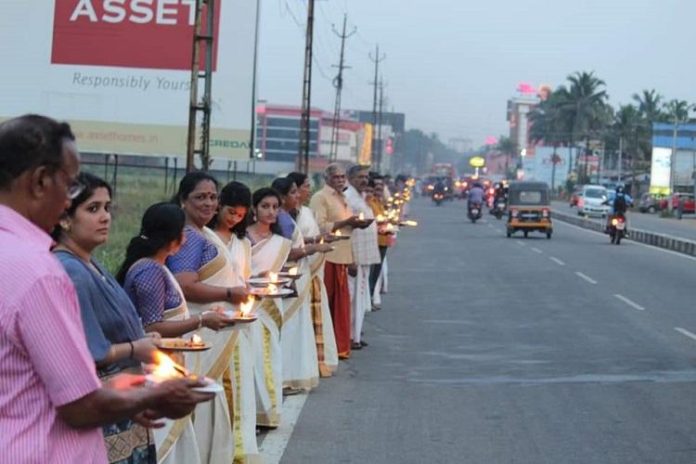 Thiruvananthapuram–More than a million people stood with a lit lamp from the northern most district of Kasargode to the southern tip in the state capital to protest against the Pinarayi Vijayan government’s attempt to dilute the traditions of the Sabarimala temple.

The Sabarimala Karma Samithi (SKS) spearheaded the Ayyappa Jyothi campaign on a stretch of 795 km across Kerala.

Actor-turned-politician Suresh Gopi handed over the lamp to devotees near Kerala border.

Giving support to the campaign, the Bharatiya Janata Party (BJP) and the Sangh parivar forces turned out in full strength to make the event a success.

“This is being staged to open the eyes of those who are trying to break the traditions of the temple. Numerous women have expressed their unhappiness in breaking the tradition of the temple,” said Suresh, a hugely popular actress.

The Sabarimala Karma Samithi and 41 other Hindu organisations, besides the BJP and the Sangh Parivar, had been working on the campaign.

Taking active part in the programme was the Pandalam Royal family members who are the official custodians of the Sabarimala temple jewellery. Their spokesperson P.S. Varma told the media that all of them are extremely happy that this programme is being held.

However, SNDP Yogam is taking part in the Women’s Wall being organised by the Pinarayi Vijayan government to uphold renaissance values and gender equality in society from Kasargode to Thiruvananthapuram on January 1.

Even though it was Vijayan who announced his programme first, the Sabarimala Karma Samithi sprang a surprise by deciding to hold theirs on December 26.

The state unit of the BJP was quick to support this programme when Pillai said: “Let us see how we match the Women’s Wall.”

Ayyappa Jyothi is “nothing political and anyone can participate”, he said.

The temple town has witnessed protests by Hindu groups since the September 28 Supreme Court verdict that allowed women of all ages to enter the temple that hitherto banned girls and women aged between 10 and 50.

The BJP and the Congress-led UDF are up in arms against the manner in which the Vijayan government is trying to use the apex court verdict to dilute the traditions of the temple.

But the state unit of the Congress party had directed its workers to boycott both these two events. (IANS)