New Delhi– Authorities on Sunday registered a criminal complaint against unknown people for mischief and causing deaths by negligence and began a probe into the Saturday train disaster in Uttar Pradesh amid conflicting casualty figures.

The government on Sunday suspended four railway officials and sent the General Manager of Northern Railway on leave following the derailment of the Kalinga Utkal Express that killed 22 passengers.

It said that the Chief Track Engineer of Northern Railway was also transferred while the Divisional Rail Manager, Delhi, and the General Manager of the Northern Railway as well as the Railway Board’s Member (Engineering) were sent on leave.

Fourteen coaches of the train derailed on Saturday evening at Khatauli in Muzaffarnagar district in Uttar Pradesh. More than 150 people were injured. Railway officials admitted that negligence by its staff was to blame for the disaster.

Mohd Jamshed from the Railway Board told the media in New Delhi that the disaster involving the Kalinga Utkal Express at Khatauli in Muzaffarnagar district claimed 20 lives and left 92 injured. Twenty-two of them were in critical condition.

But officials in Uttar Pradesh put the death toll at between 21 and 24 and announced an end to rescue work. At least 156 people were injured, they said. The injured were being treated at medical facilities in Muzaffarnagar and Meerut. 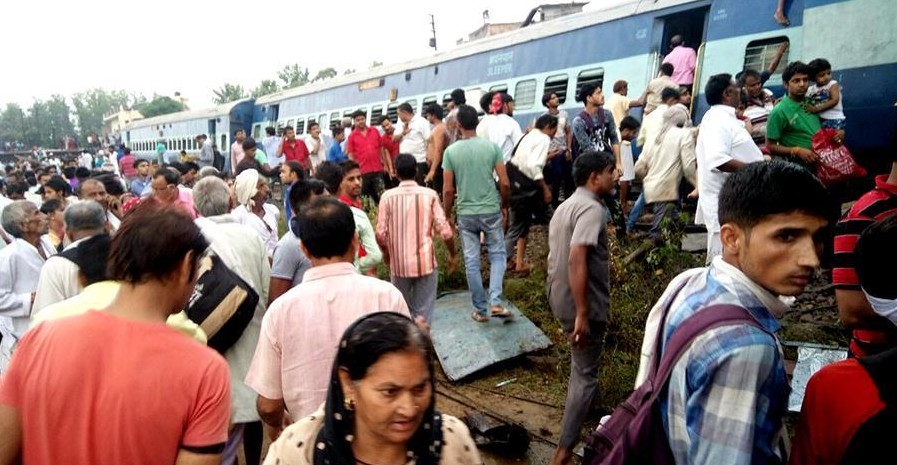 In New Delhi, Railway Minister Suresh Prabhu said he had told the Chairman of the Railway Board to fix responsibility for the disaster by Sunday evening on the strength of prima facie evidence.

“Will not allow laxity in operations by the Board,” Prabhu tweeted.

Jamshed said the railways were probing the accident from all angles and a case had been registered by the railway police under relevant sections for “causing damage or destruction of railway properties, for mischief, for death by negligence, for causing grievous hurt, injuring lives by overlooking safety”.

He admitted that some maintenance work was under way at the accident site and safety authorities would look into possible sabatoge and “if all precautions were taken” while the repair work was being conducted.

“Some track maintenance equipment (apparently left behind by repair workers) were found at the accident site. All these things will be investigated. Forensic help will be taken.”

A railway official requesting anonymity said it appeared that negligence was the prima facie reason that led to the tragedy. “Action against some senior officials is likely.”

The Kalinga Utkal Express was on its way from Puri in Odisha to Haridwar in Uttarakhand on Saturday when some of its coaches derailed at Khatauli. The accident was so severe that some of the derailed coaches mounted on others.

As the authorities probed the reason for the crash, an unverified telephonic conversation apparently between two railway employees widely circulated on social media on Sunday hinted that “negligence” may have caused the accident.

The nearly 15-minute audio clip could not be verified independently. Jamshed said they were looking into it.

One of the men in the audio clip apparently posted at a crossing near the accident site says “poor patrolling” on the track where maintenance work was under way was one of the causes.

“Welding work was under way at a section of the railway track… but the workers did not fix the block of the track and left it loose. Gates near the crossing were closed. A piece (of the track) was not fixed and when the Utkal Express arrived, 14 of its coaches got derailed,” one of the railway employees is heard saying.

“Neither the line, on which the work was under way, was fixed nor they had put any flag or a signboard (as a stop signal). The accident occurred due to negligence. It seems all (concerned employees) will be suspended,” he says.

The other replies that heads will roll and all including “Junior Engineer and other officials” were likely to face action.

They also tell each other that the workers had left some equipment between the tracks after finishing their work. “At least they could have removed the machine and put a red flag there, perhaps the tragedy could have been averted.”

Railways spokesperson Anil Saxena told IANS that a terror angle was not being been ruled out.

The railway staff was working to clear the derailed coaches and repair the damaged tracks as all trains on the route have been diverted. The operation to resume services on the track was expected to be completed by Sunday night.

A Home Department official said 90 ambulances and four teams of the National Disaster Response Force were engaged in rescue work through the night but many relatives of the dead and injured complained of lack of ambulances to ferry the injured to hospitals. (IANS)