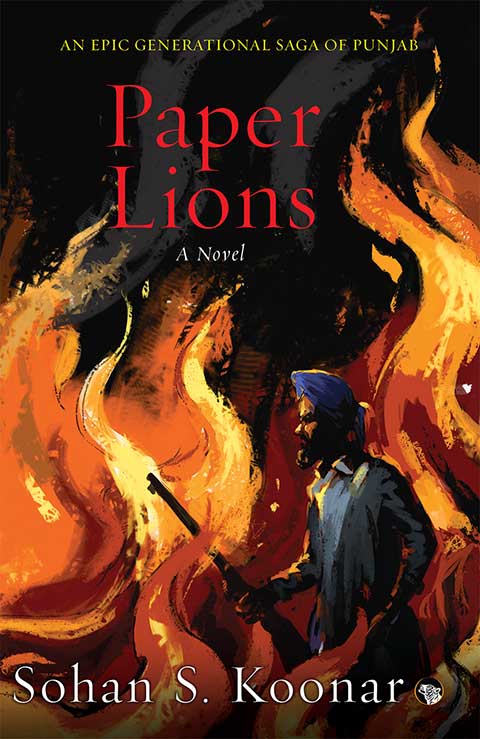 New Delhi– When eminent Canadian author M.G. Vassanji does the final edit of a book you can be sure it goes beyond the ordinary. And that’s exactly what “Paper Lions” delivers as Sohan S. Koonar work and its planned sequels in no mean way match the sweep of “Gone With The Wind” with Punjab as its canvas — a timely work on the 550th birth anniversary of Guru Nanak with Sikhs as its protagonists.

“I have been trying to think of a premise to write a historical novel about Punjab and the Sikhs for a couple of decades. A chance meeting with New York novelist Naomi Regin finally set me on this quest. She mentioned that there was nothing about Sikhs in English literature that she could find and advised me to write what I know best, about my own people,” Koonar, who was born in India and now lives with his Italian wife in homes in Canada, Italy and India, told IANS in an interview about the writing of “Paper Lions” (Speaking Tiger/pp 447/Rs 599).

“I took her advice to heart as I too soon discovered that there really was a paucity of Sikh protagonists in English literature and what was mentioned or portrayed as Sikhs was largely misleading or caricatured. Even Hollywood and Bollywood indulged in this for a long time and only recently have we seen positive and fulsome portrayals of Sikhs in film and TV. Ben Kingsley as a driving instructor in ‘Learning To Drive’ and the excellent portrayal of a Sikh police inspector by Saif Ali Khan in ‘Sacred Games’.

“Hopefully my contribution of ‘Paper Lions’ adds to this growing list,” he added.

The novel revolves around three characters: Bikram, the only son of an impoverished family, who enlists in the British Indian Army hoping to draw a modest income; Basanti, a 12-year-old Bajigar girl who navigates new boundaries with her nomadic clan to build life and home afresh; and Ajit, the erstwhile Zaildar (grand landlord) of a vast and thriving estate.

The decisions of these characters and their consequences ripple across generations in poignant moments of sorrow and exhilaration. Their lives intertwine in unexpected ways, playing out against a canvas of intricate family dynamics, class struggles, the drama of politics and manipulation, and the tumult of Partition. Independent India comes of age as the protagonists, albiet fractured, head towards a new dawn.

The plotting and planning of the novel took a year, during which the author made a list of about one hundred points/events/characters to flesh it out and then methodically began to research and develop them.

“In historical fiction it is important to be factual about recorded events, social and economic conditions prevalent at that time period such as salaries and incomes that allowed me to predict and predicate the conditions under which my characters lived or survived and interacted in the social structures,” Koonar explained.

He chose to start the novel in 1937 to be able to build a base for the Independence and Partition of India, “one a glorious and latter a cataclysmic event for Greater Punjab. This set the table nicely for the premise of ‘Paper Lions’ which is the first in a planned Lions Trilogy that will bring the conclusion to the present”, the author said.

“Paper Lions” ends in 1965 and “Wounded Lions” will cover the period 1965 to 1995, another disastrous and tumultuous period in the history of modern Indian Punjab. “Lions In the Spring” will be the third in the series and will be about the widely dispersed Sikh diaspora. In a way, this could go well beyond “Gone With The Wind”.

“As I had decided to include an exotic, nomad woman of the Bajigars as one of the protagonists it was the most challenging of my projects. The Bajigars had no written language or recorded history except for few mentions in censuses or abstract paragraphs in written accounts. My friend found an 80-year-old blind, tribal oral historian (a groat) near Khanna and he became the source of enough detail of Bajigar history, life and culture that made Basanti such a credible character.

“I do believe that as far as I know my writing is the first detailed mention in English literature of this fascinating people and I am indeed fortunate that I was able to record some of this fast disappearing culture,” Koonar elaborated.

Even as he completes the research for “Wounded Lions”, Koonar has started writing a shorter novel, “Wilted Flowers” about a young Sikh refugee in Canada that he describes as a “filler effort” that should be completed by end of the year.

“My focus remains the completion of the Lions Trilogy and my prayer is that Waheguru Ji grants me health to attain this task.

“Sikhs remain an enigma outside of India in the Western world and need to tell their stories in languages other than Punjabi. The interesting ones will be made into films and TV serials and hopefully widely viewed internationally. This will lead to a proper understanding of our faith and traditions and values. This is my prayer,” Koonar concluded. (IANS)