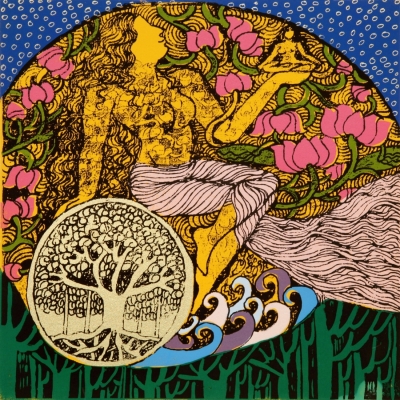 New Delhi– An online exhibition of etchings, serigraphs, screen printing and lithographs by noted artist Seema Kohli, that captures the journey of Kohli in printmaking, went on view on December 21. Titled ‘The Alchemy of Process’, it can be viewed on the website of India International Centre till January 3, 2021.

Seema has had over 32 solo shows and she explores the themes of beauty, sensuality and spirituality expressed through her works based on the concept of ‘Hiranayagarbha’ or ‘The Golden Womb’ from which we have emerged, which is self-pervading, engulfs every single thing.

Seema’s work is inspired by and firmly grounded in her extensive knowledge of Indian spirituality, mythology and cosmology which is most often filtered through the lens of the sacred feminine. An overarching theme in her work has been the regeneration of life which can be seen in extensive and evolving series, ‘Golden Womb’ and ‘Tree of Life’, said a note on her exhibition. Her informed and intuitive knowledge of India’s detailed taxonomies of mythological, historical and living spirituality is distilled through diverse bodies of work which offer unique pathways through different processes and forms.

In addition to detailed large-scaled paintings for which she is so well known, the legacy of her long career has been one of broad exploration and experimentation in both traditional and avant-garde mediums – diverse printmaking processes though performance and video.

For a painter with such a refined and meticulous control of her medium, printmaking has provided an opportunity for experimentation, chance and accident. As images emerge through multiple states there can be a keen sense of mystery and unpredictability. In some processes such as intaglio, the reversal of an image from plate to paper can be revelatory, akin to seeing a familiar image from a startling new vantage point.

While intaglio printmaking might seem to be the antipathy of the lush colour palette characteristic of Seema’s paintings, it privileges a quality of line that underlies all of her work and is particularly reminiscent of earlier primarily linear work. Orchestrating a complex array of visual information through line and tone alone requires a strong command of value relationships grounded by shrewd composition and design. Two very different bodies of work illustrate this superbly. The series ‘Unending Dance of Light’ share dense compositions and rich tonality.

In each of Seema’s 64 Yoginis (Chaunsath Yogini) a circle inscribed in a square holds an image of a deity from this powerful female collective. Based on a Sanskrit term, the Yogini is a female master practitioner of yoga possessing magical and supernatural powers. Seema has a profound sense of identification with the energizing and uniquely transgressive force of the Yogini, having visited and enacted personal rituals and public performances at several of India’s both celebrated and abandoned Yogini temples. While drawing from traditional symbolism and meaning, Seema infuses the yogini with own sense of meaning and identification. Although Yogini’s appear prominently in her paintings and sculpture, this series of small etchings is unique in that all 64 Yoginis can be apprehended together as arranged in a downward facing triangle symbolic of female energy.

In a series of prints created in 2002, ‘The Golden Womb’, a circle sits within a deep blue 20″ square, a compositional strategy she employs in many of her works. Here the circle can be seen as both exterior form and interior space – the shape or our world and the womb of life. Playful images curl up against and float beyond the circle’s circumference as women, demigods and cows tattooed with patterns of flora and fauna reflect flashes gold mingled with rainbows of colour.

While in her paintings she arrives at one final work of art, through the serigraphic process each piece in an edition might be slightly different.

For Seema and many artists, printmaking not only opens up diverse techniques and effects that expand and transform their work, but importantly allows for a more democratic distribution than is possible with a single painting or sculpture. New images are born from the unique possibilities of the printmaking process while familiar themes can be revisited and reinvented. (IANS)