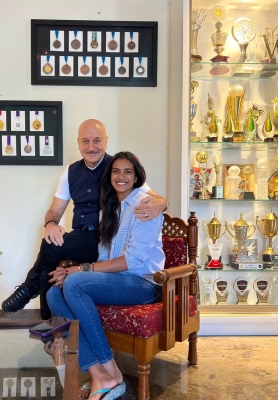 Hyderabad– Veteran actor Anupam Kher recently paid a visit to ace badminton player PV Sindhu’s house and was completely bowled over after looking at the huge number of trophies and medals won over the years by one of India’s most successful sportswomen ever.

The 67-year-old actor shared a video of their meeting, giving fans a tour of her house, including her massive trophy collection.

Starting from the trophies that she won for the Under-16 tournaments and the Olympics, Sindhu gave an inside view of all her accomplishments and the pride that she brought to the country through the sport.

In the video posted by Kher on Instagram Reels featuring Sindhu’s medals and trophies, he can be heard saying, “One and only champion, look at this wall, I used to be very proud that mere wall pe kaafi saare awards hai par ye toh kamaal hai, (that wall has loads of awards but this is amazing) oh my god.”

The actor-author also said in the video that he had a conversation with Sindhu’s father where he shared plans of taking over another floor as they are running short of a place for trophies and medals.

The versatile artist who felt ‘privileged’ to have visited the badminton player’s house, wrote how he was mesmerised to see all the feathers that she has added to her embellished cap.

“This is AMAZING: Recently I had the privilege of visiting CHAMP @pvsindhu1’s home. She very humbly gave me a tour of her achievements! Right from the age of 8! I was completely bowled by her awards, trophies & humility! She is our daughter of India, our honour. She is our motivating hero. Jai ho, Jai hind,” Kher captioned the video.

On the other hand, Sindhu also shared a picture of their meeting on her social media account saying it was her ‘honour’ to meet the veteran actor.

“Had the fortune of spending time with one of the all-time greats of Indian cinema. The laughs, the memories and quality conversation. What an honour,” she wrote.

The 27-year Sindhu, who is a two-time Olympic medallist having won a silver in women’s singles at the 2016 Rio Olympics and bronze in Tokyo last year, is currently on the path to recovery after sustaining an ankle injury during the Commonwealth Games in Birmingham while Anupam Kher is currently riding on the success of his movie The Kashmir Files and Karthikeya 2. (IANS)