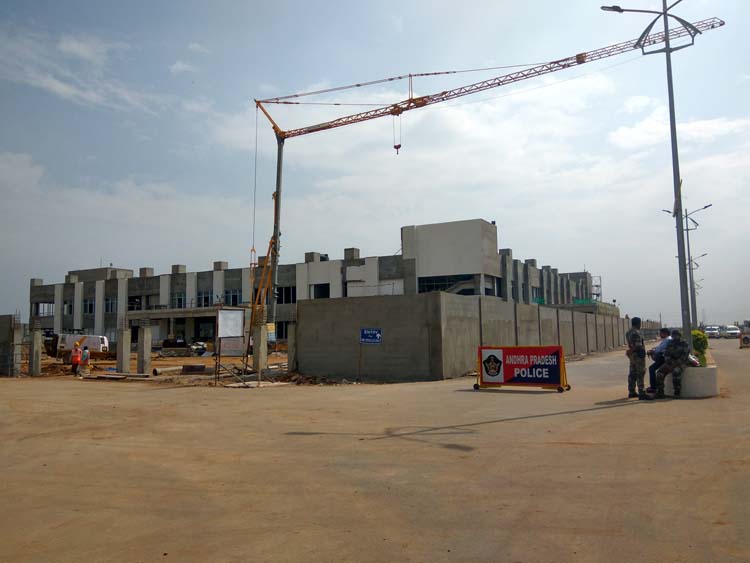 Vijayawada– The development of Andhra Pradesh’s new capital Amaravati on the banks of the Krishna river near here has entered the execution phase — with the focus now shifting to creating critical infrastructure.

The state administration moving here from Hyderabad recently provided the impetus for the development of Amaravati, which promises to be a “world-class blue-green city”.

After preparing the Master Plan with the help of Singapore in the first year and successfully ensuring land pooling in the second, the project for developing the 217 sq km greenfield city has entered a key phase with the launch of road-laying works.

The area is abuzz with activity as men and machinery lay the Seed Access Road connecting Vijayawada to the heart of Amaravati. Some other key roads under Phase 1 have also been tendered out by the Andhra Pradesh Capital Region Development Authority (APCRDA). With $2.2 billion funding tied up from the World Bank and HUDCO, APCRDA is creating infrastructure and taking up some key economic projects under Phase 1, scheduled to be completed by the end of next year.

Geographically located at the centre of the new state — with abundant water resources and close to major economic hubs — Amaravati is being designed to house a 35-million population and is projected to provide 3.31 million jobs by 2035.

While an estimated Rs 58,000 crore capex is required for developing Amaravati in 20 years, about 50 percent of this will be spent in the next three years.

The road connectivity now being laid will open up the city, benefiting the farmers who came forward to give 33,000 acres of land under a unique Land Pooling System (LPS), the largest exercise of this kind in the country.

The process of handing over developed residential and commercial plots to farmers has almost been completed, and the government will be investing over Rs 7,000 crore to provide infrastructure for the 17,000 acres handed back.

As 95 per cent of residential land and 50 per cent commercial land is with farmers, construction activity is expected to begin soon with developers joining hands with farmers.

The government set the ball rolling in terms of kicking off economic activity with the setting up of the Interim Government Complex (IGC) in October last year.

About 6,000 employees started functioning from the IGC, comprising six blocks of 600,000 sq ft, and completed in a record eight months — an astonishing feat.

APCRDA officials expect fast-paced development over the next two years with the creation of infrastructure and some major economic projects under Phase 1.

One of the key projects is the main government complex, which will come up on 1,400 acres and comprise the Raj Bhavan, the High Court, the legislature, the secretariat, the Chief Minister’s bungalow, houses of ministers and other officials.

Two iconic structures will form the nucleus of the government complex to create value and attract people to the city.

Norman Foster + Partners of Britain will be the master architect who will give the conceptual plan and architecture design for the entire complex.

APCRDA has also identified 6.8 sq km of area as the prime economic hub, which will be developed through the Swiss Challenge mode. After selecting the master developer, the government will form a joint venture, which will invite global giants to set up their operations and allot them land through auctions.

“Constructing a capital city with few buildings, infrastructure and connectivity is an easy proposition but kick starting a capital city and its economy in itself is a huge challenge,” V. Rama Manohara Rao, Additional Commissioner, APCRDA, told IANS.

The economy will be driven by nine thematic cities — justice, sports, knowledge, electronics, media, tourism, education, government and finance. APCRDA is identifying an anchor for each city to kick start the activity.

Officials say while it may take 30 to 40 years for this mega city to reach its full potential, the first step has to be in the right direction.

“With the physical master plan ready in record time, the next step is to get people inside. As a first step to kick start the economic activity in the private sector, the government allotted major chunks of land to universities,” said Y. Nagireddy, APCRDA’s Director of Economic Development.

Dubai-based B.R. Shetty Group will invest Rs 1,000 crore for its Medi City project, which will include a stem cell unit, a super speciality hospital and a star hotel.

The Indo-UK Institute of Health has been allotted 150 acres of land to set up a super speciality hospital and a medical college.