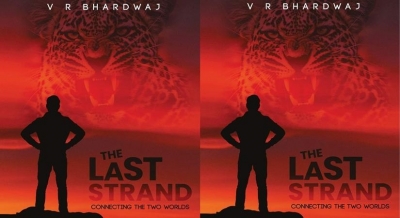 New Delhi– ‘The Last Strand’, a new book by author V.R. Bhardwaj, is an intriguing tale of friendship, love, and leadership through challenging times. The author says that he has always been intrigued by the words of Khalil Gibran. “His magnificent words have always been the subtle catalyst that stimulate a long chain of thoughts.”

Bhardwaj quotes one of Gibran’s statements,”Out of suffering have emerged the strongest souls; the most massive characters are seared with scars”, which he says have shown him the path of the story behind “The Last Strand”.

“The main characters of the plot have scarred pasts but have a willingness to create a better future. The story, comprising those scarred, complex but positively motivated characters, moves from a small village in the mountains to the fast-paced life of metropolitan Delhi. As the story moves, the connections develop, ambitions soar, mysteries unfold and one day the unthinkable happens leading to a series of tragic events. Overall, it is a mixed bag of emotions and thrill with life’s philosophies at its core,” he tells IANSlife.

Asked about the story behind the book, the debut author shares:

“There is a notable chronicle behind this book which I have never shared earlier. Although the book was published in the year 2020, the first draft of it was penned way back in 2014. That was the year when I had migrated to Australia with my family from India. As anyone would acknowledge that moving the countries for good can’t be easy; more so for me as I had the plans for a new start-up and wasn’t motivated enough to get into a regularly paying job. Since, a start-up journey is often full of its own share of hardships and delays, the year of 2014 was especially a tough one. Simply speaking, I had almost no source of revenue for almost one year while there was a whole family to be fed. My wife did some jobs that kept us going and the life savings drained at a rapid pace. At that time, I had two options, either to succumb to the huge pressure to survive or to stay calm to recognize an opportunity even in those testing times.”

“With the support of the family, I thankfully chose the latter. The story idea was in my mind for a few months already. After spending a few hours on my business every day, I made sure that I spent most of my free time reading and writing. This not only gave me much needed clarity but also kept me miles away from any sort of negativity. 3-4 months of persistent effort eventually culminated into a whole 100,000 words book,” he shares.

“I sometimes say to my kids that for me, one of the toughest times of my life actually resulted into a big achievement in the form of a whole book. So, never jump to a conclusion without looking around for opportunities. If one door closes, there is definitely another one, somewhere, that is open for you. All we need is some self-belief and all we need to do is just hang in there and keep looking. The right opportunity shall certainly be spotted.” (IANS)