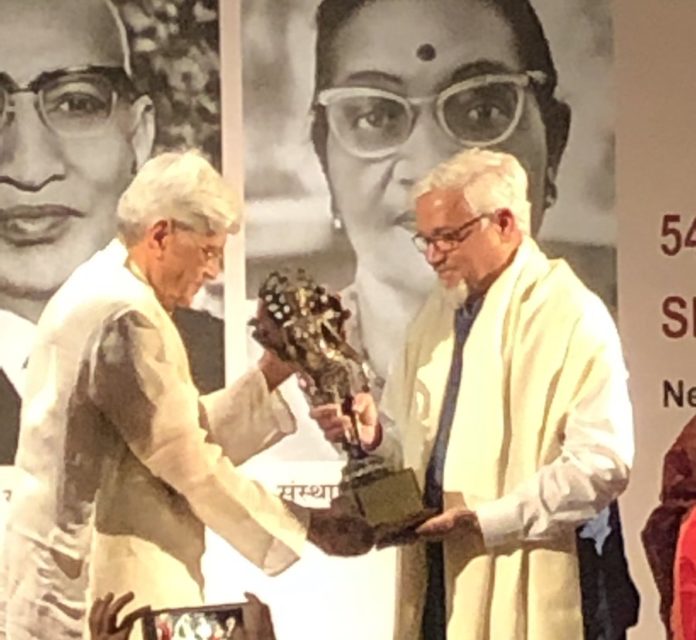 New Delhi– Renowned author Amitav Ghosh was awarded the 54th Jnanpith Award for his contribution to the enrichment of Indian literature in English at a ceremony here on Wednesday.

He was conferred the award by former governor of West Bengal Gopalkrishna Gandhi.

Amitav Ghosh is the first English writer to get this prestigious award.

Receiving the award, Amitav Ghosh said, “It is an incredible moment of my life. It is a remarkable thing that I am getting this award”.

While receiving the award, he also remembered Girish Karnad who passed away on Monday.

“Girish Karnad was a friend whom I so much looked up to. He was an important voice in our lives. We have lost him just a few day ago. He is very much on my mind,” Ghosh said.

He said Jnanpith goes beyond literary achievement as it acknowledges a bond of trust and affection which some times arises between writers and communities of readers.

He also said that when he started writing, he never imagined that Jnanpith would ever come his way.

Speaking about dominance of English language which is a concern to writers who write in other languages, Ghosh said despite writing in English, he fully shares the concern.

He said languages in india flow and mingle with each other.

Speaking about Amitav Ghosh, Gopalkrishna Gandhi said that Ghosh’ work comes from effort no less than the strokes of inspiration. He said today’s environment was that of violence, hatred and anger.

He urged Ghose to bring in a change to save the environment through his writings.

The award consisted of a shawl, citation, statue of goddess Saraswati and Rs 11 lakh.  (IANS)