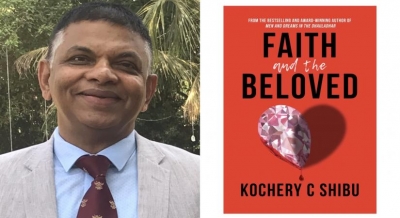 New Delhi– Kochery C Shibu, a former navy veteran and now a bestselling author of ‘Men and Dreams in the Dhauladhar’, says that there was a story teller in him since school days. The 1981 National Defence Academy graduate adds that a vast amount of travelling and seeing places and people first hand goes a long way in adding authenticity to the writing.

‘Faith and the Beloved’ is his second book. Many of the characters in the novel are inspired from those whom the Bengaluru-based author has encountered during his extensive travel.

Could you tell us about your work in the Navy and the hydel projects you undertook?

Shibu: I served in the Indian Navy for more than two decades in the executive branch. I specialised in Antisubmarine warfare and commanded two warships during my tenure before taking VRS in 2005. From 2005 to 2017 I was closely associated with Hydroelectric projects. I have executed Hydroelectric projects in the Cauvery river basin in Karnataka, the Beas river Basin in Himachal and Teesta River basin in Sikkim. I wrote my first book Men and Dreams in the Dhauladhar whilst working at a remote project site in Himachal.

I have had a career shift and have shifted from the snow clad mountains to the blue oceans. I have been busy with the setting up of a shipping company since 2017. This job entailed extensive travel to various places. These experiences have been inspirational in the second book ‘Faith and the Beloved’.

How did the storyteller’s hat come about for you, after decades of serving the country in the Navy?

Shibu: The story teller has been there in me since the school days. As a career soldier, the writing was mostly related to strategy, tactics, and technical evaluation of weapon and equipment and of course war games and war gaming. As a career soldier, it was not possible to dedicate time beyond professional writing to fiction writing. During the naval career, I was in the think tank of the Navy in Delhi for four years, during which period, I have done extensive writing. Most of the writing was about simplifying military concepts and weapons and Equipment technology to the Bureaucrats in the MOD and the Finance ministry teams. In many ways, it was telling the story of a concept of warfare. This was instrumental in honing the skill set further for writing. It was only after leaving the navy that I was able to dedicate four years’ time in research and writing of the first book. Followed by another year of editing.

Both of your novels have elements of thrill, mystery and human relationships. What’s your process of writing? How do you try to bring outr your experience in your words?

Shibu: My process of writing starts with character sketching. This is an ongoing process to observe and write about places and people you meet, and read about and to sketch a character which could be used in storytelling. Once I start writing he novel, the characters are picked from the panorama of characters and then they are further adapted as the plot develops. I believe that the characters should come alive as the reader reads. There is always substantial amount of research which goes into the environment and time and space co-relation and events and technology co-relation. Experience and vast reading forms the bed rock on which all the elements are developed. The development of thrill is always a challenge and requires meticulous planning of time, space events and people.

This has been at times like a puzzle solving execise of the mind, to think through events and people at various places and different times and events which ultimately tie up together as the events unfold. Mystery and mystique is also built in with the development of thrill as a combined exercise. The human relationships are developed as part of character sketching and is often challenging as the character needs to follow a behavioural pattern with out the author being judgemental. The vast amount of travelling and seeing places and people first hand goes a long way in adding authenticity to the writing. In many cases, it would be deep research and talking to people and inferring to develop the experiences in words

Can you give us some insights as to how are you are as a reader?

Shibu: By choice I have stopped reading fiction since 2009 when I started writing the first novel and have continued that. This is to develop a style of writing that is unique and un influenced, even unknowingly by any fiction novel that one has read during the period that the writing was done . Otherwise I have read across the spectrum from all kinds of fiction, non-fiction and technical books. There was a period when I used to read a book a day. I believe that vast reading forms the base of any good writing and I still follow that in terms of the research.

How are you responding to reader reviews so far? What’s next for you?

Shibu: The reader is the king and the queen. I take the reader reviews in a stride. Till now the majority of the readers have liked the books that I have written. I have written a literary fiction in the first novel which was a combination of technical fiction, classical writing and thriller combined into one. In the second book, it has been a crime thriller interspersed with classical /literary writing. The third book would be different, though not yet crystalised. The next book would be out in 2022. (IANS)