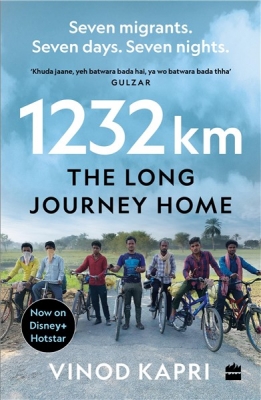 The lockdown left millions of migrant labourers without jobs, food and home. Desperate and helpless, most took to the road, embarking on a long, often fatal journey home.

This is the account of one such journey that seven migrants from Bihar – Ritesh, Ashish, Ram Babu, Sonu, Krishna, Sandeep and Mukesh – undertook on their bicycles that lasted for seven days and seven nights. Accompanying them was National Award-winning filmmaker Vinod Kapri.

The book records their journey on the road from Ghaziabad in Uttar Pradesh to Saharsa in Bihar, spanning 1,232 kilometres. It is a story of courage as well as the desperation of the seven men braving police batons and insults, battling hunger and exhaustion to reach their destination – their home.

A documentary based on this journey, directed by Vinod Kapri, has just been released on Disney+ Hotstar.

“When I set out on this journey,” Kapri said, “I had a deep curiosity about what makes the migrant labourers’ bicycle 1,232 kilometres without food or any help in such extreme circumstances. I wanted to know who these people are. I wanted to see them up close.”

“This is not a journey about courage, willpower or grit. It is about good and bad people in our society. The migrants I filmed were getting unexpected help from strangers, while the authorities, who one would expect cooperation from, were harassing them.

“These people built our homes, our cities. Do we care to know their names? About their families? The way I look at them now is entirely different,” he added.

Social scientist, poet and author Kamla Bhasin has described the book as “a testament to the resilience and resolve of our working classes and the callousness of our State. It says that people will outlive all rulers, however, powerful”.

Said Ridhima Kumar, Commissioning Editor at HarperCollins India: “The painful images of labourers (often with children) walking or cycling home at the peak of summer will long remain implanted in my memory. Here’s an incisive reportage of the seven of them, angry and frustrated yet full of hopes and dreams, on their way home – 1232 kilometres away.”

Vinod Kapri won a National Award for his 2014 documentary “Can’t Take This Shit Anymore” about a group of gutsy women who wrested their right to dignity from society that was cited as the Best Film on Social Issues. His critically acclaimed film “Pihu”, a two-year-old girl who gets into an unexpected situation where she is all by herself, opened the 48th International Film Festival of India and won two awards at the 14th Trans-Saharan International Film Festival at Zagora (Morocco) the same year.