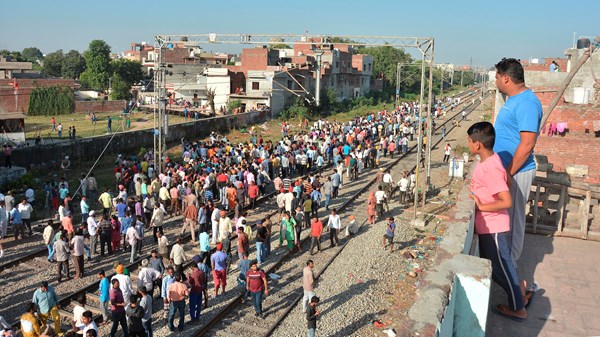 Chandigarh–While remaining underground, the organizer of the Dusshera event, where at least 59 people were crushed by a speeding train, on Monday released a video claiming he had taken all permissions, and that appeals were made to people standing on the tracks to vacate the area.

Saurabh Madaan Mithu, a close aide of Punjab cabinet minister Navjot Singh Sidhu and his wife Navjot Kaur, released a video on Monday from an undisclosed location claiming that he, his councillor mother and other organisers had nothing to do with the tragedy.

“We had taken all necessary permissions and ensured proper safety measures inside the ground where the Dusshera event was held. The people who gathered on the railway tracks were outside the ground. We made several appeals to them to vacate the tracks,” Madaan claimed in a choked voice, seeking pardon.

He said the police and fire brigade were also present at the ground where the Ravan effigy was burnt on Friday evening around 7 pm.

However, video footage of the event showed one anchor, in the presence of Madaan and Navjot Kaur, boasting that over 5,000 people were standing on the tracks and even if 500 trains crossed the tracks, these people will not move.

The people standing on the tracks could not hear the hooter of the approaching train in the noise caused by the bursting crackers when the Ravan effigy was set on fire.

There are allegations that Sidhu’s wife, Madaan and other organisers fled the spot when the tragedy struck. They did not stay back to help the victims, including injured.

No case has been registered by the Punjab Police against the organisers of the event so far.

Despite that, Madaan and others continue to be underground while Sidhu has been on the offensive saying his wife and aides did nothing wrong and the blame for the accident was on the railway authorities.

Sidhu has questioned the railways for not holding a probe into the incident and giving a clean chit to the train driver and other staff for the lapses that led to the accident.

Calling the incident as a “massacre”, the opposition Shiromani Akali Dal is demanding registration of a case of murder against Navjot Kaur, Madaan and other ruling Congress leaders who organised the Dusshera event. (IANS)