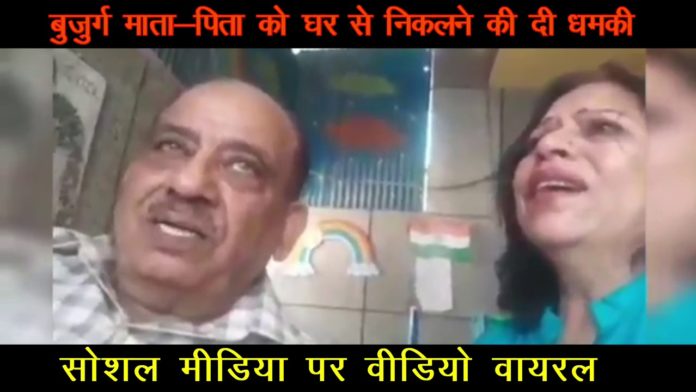 Ghaziabad– After a elderly couple went online with a heartfelt appeal to save them from daily harassment by their son and daughter-in-law, the district administration in Ghaziabad, Uttar Pradesh came to the rescue of the couple.

The victims (both aged 68) had recently shared a video on social media where they narrated how their son and daughter-in-law were forcing them to move out of their own house.

The 68-year-old man was identified as Indrajit Grover, who alleged that he was already dealing with heart problems, while his wife had got her knee replaced and was also a patient of arthritis, but despite their sufferings the couple was troubled by the harassment on part of their son and daughter-in-law.

“Our son is unconcerned where we would go, whether we live or die,” Grover said in the video.

“We are living in a house that we bought with our own hard-earned money. We have only one son and our daughter is married. Our son and daughter-in-law are harassing us,” he added in the video.

Grover said that his son has been forcing the couple to move out of the house so that he can stay there with his wife.

He later sought help from the district magistrate (DM) and have given a complaint too.

“I have requested the authorities to rescue me from the clutches of these greedy kids and help me live in the house that we have bought from our own money,” he said.

Reacting to the video, the district magistrate’s office intervened.

Tweeting about the situation, the DM said the matter was examined and has been resolved now. The DM said it was basically a family dispute.

“The son and his wife have been asked to vacate their parents’ house within 10 days and live elsewhere,” the Ghaziabad DM said in a tweet.

The authorities also made the son sign a written agreement saying he would vacate the house. (IANS)