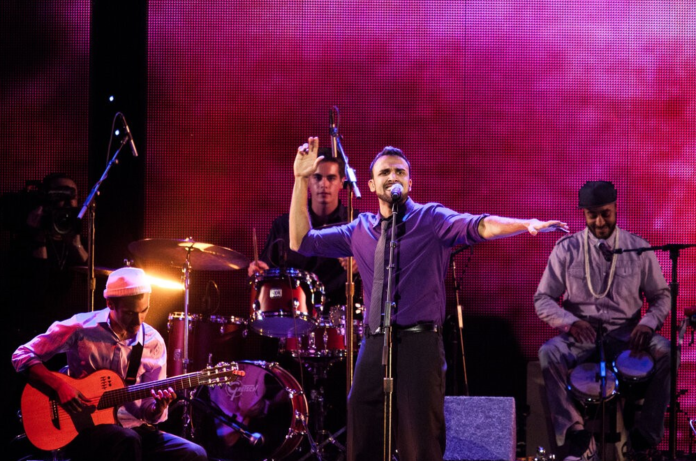 BOSTON–Aditya Prakash Ensemble regret to announce that all spring 2020 tour dates have been postponed due to the CORVID-19 pandemic. Concerts set to kick off on April 1st in support of their new DIASPORA KID album — in Washington DC, New York, Boston, Toronto, Los Angeles, Berkeley, Portland and Seattle — are planned to be re-scheduled for this autumn.

Known for his powerful and emotive voice, vocalist Aditya Prakash is among the foremost young virtuosos of Carnatic music, the traditional classical style of South India. Growing up in his native Los Angeles, Aditya was rooted in South Indian arts and culture through his immigrant family, but at school found himself in a distinct minority. He studied Carnatic voice with great dedication from childhood, but kept that passion separate from his public persona among peers and friends. Balancing two worlds in this way engenders a feeling of being separate from both cultures, but it also drives the creative to find ways to weave these worlds together.

The power of his ancestral culture and his formidable developing talent took the lead when, at age fifteen, Aditya was summoned and personally selected by the great Ravi Shankar to tour. Soon such revered stages as Carnegie Hall and Hollywood Bowl appeared on Aditya’s resumé — but more importantly they enhanced his confidence and his sense of self. Returning to high school, he picked up the lead role in a class production of Beauty and The Beast — surprising everyone, including himself! — and set out on a path toward reconciling the disparate influences in his life.

Looking forward to college, he sought the advice of the master, who suggested Aditya commit himself completely to music. But Aditya chose to study ethnomusicology and music at UCLA, where he gained a broad understanding of western music and met the key players and friends who would help move his vision forward. Aditya was now certain of his Carnatic voice, and ready to explore its potential for groundbreaking synergy in a jazz context and beyond.

Aditya Prakash Ensemble independently released two explorative and powerful albums, and have just released Diaspora Kid, its title a reference to the artist’s cross-cultural upbringing in Los Angeles. Prakash carefully selected 24 musicians — from the LA jazz scene and fellow maestros from the Indian classical tradition — to come together and make his vision a reality. One can hear the influence of both sides, but like all truly groundbreaking projects, we can identify with the result on its own, as an entirely new and wonderful experience. In this way thee music mirrors Aditya’s experience and the experience of so many who are physically, but not spiritually, separated from their cultures.

“Diaspora Kid is about finding my roots in my ever-changing environment, filled with a diverse array of inspirations. From rhythmic Carnatic grooves over a brass band (Greenwood), to an alternative rock, Radiohead-inspired feel (Wave for an Ocean), to an aggressive Tigran Hamasyan-inspired modal jazz tune (The Warrior), to an Irish fiddle-inspired sound (Irish Song) to a hip hop rap vibe (Up in Flames), to a funky Indian folk feel (Ambiga), and finally the pure Carnatic (Roots – Ramakali) – this album is about moving through the melting pot of cultures I grew up with in Los Angeles through the lens of the Indian classical voice,” says Prakash.

Recorded at the Evelyn & Mo Ostin Music Center at UCLA’s Herb Alpert School of Music and at Mount Atlas Studio in Chennai, India, Diaspora Kid was released by Ropeadope Records on March 20, 2020.