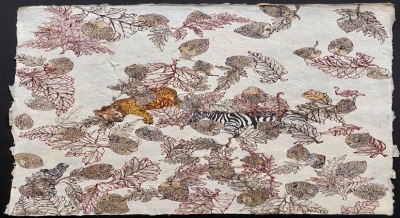 New Delhi– The works in “The Porcelain Rose” are a space of folly. All flora and fauna are juxtaposed with each other in unlikely and improbable combinations, in which they cannot possibly exist. As opposed to the forest that abides by the natural order, the works here are rife with illogic, unreason and contrariness.

The exhibition showcasing a new body of work by artist Paula Sengupta opens at ‘Gallery Espace’ virtually today, and will be on view until October 24, 2021, on the gallery website. It includes drawings which speak of Paula’s continuing engagement with chintz, digital photo prints and animation, a medium she works in for the first time.

“Every work conjures a space of fantasy and inevitable folly. Much of the smaller reptilian and cacti-like flora and fauna drift into this series from the earlier body of work in ‘Of herbariums, hortoriums and home’, exhibited in 2018. Observed mostly from a visit to the Udawallawe National Park in Sri Lanka on a visit in October 2018, visits to the Yala and Wilpattu Sanctuaries in Sri Lanka, as also another visit to Tanzania remain derailed due to the ongoing pandemic,” notes Paula Sengupta.

“The Porcelain Rose” dedicated to Chintz, “chintz” derived from the Hindi word “chheet” is a common printed cotton textile popularly used across the Indian Subcontinent. Chintz was originally a woodblock printed, painted or stained calico produced in India from 1600 to 1800. Around 1600, Portuguese and Dutch traders were bringing examples of Indian chintz into Europe on a small scale, but the English and French merchants began sending large quantities. By 1680, more than a million pieces of chintz were being imported into England per year, and a similar quantity was going to France and the Dutch Republic.

“The porcelain rose or Etlingera elatior, a succulent plant indigenous to regions with tropical climate, does indeed encapsulate the essence of Sengupta’s most recent project in many ways. A native of the Southeast Asian humid rainforests, it is also found in the equatorial regions of Africa. The genus is named after 18th century German botanist Andreas Ernst Etlinger, reflecting a well-established strategy of colonial nomenclature. The interregional associations of the plant are further enhanced by the evocation of porcelain-specialized pottery integral to Chinese art history. Furthermore, this flower embodies a duality: its awe-inspiring appearance combines with the fragility of porcelain. This contradiction enmeshed with interregional travels and colonial histories constitutes the core of Sengupta’s venture, offering a middle ground between organization and chaos, visuality and abstraction, unravelling and camouflage,” says Rajarshi Sengupta, academician, practitioner and art historian in his essay on “The Porcelain Rose”.

Trained as a traditional printmaker, Paula’s repertoire as an artist includes broadsheets, artist’s books, objects, installation-performance work, and community art projects. She works across mediums that include printmaking, textiles and embroidery, papermaking, and much else. (IANS)