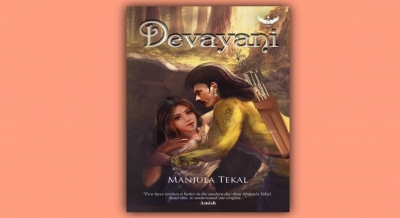 New Delhi– While the term ‘Mahabharata’ usually evokes stories of Kauravas, Pandavas and their affiliate mythological characters, the largely-obscured tale of their ancestors Yayati and Devayani pre-dates the main narrative by several generations, and has much insight to offer into Indian mythology. The tale of love, betrayal and self-realisation has been revisited by US-based author-translator Manjula Tekal in her new book ‘Devayani’.

A pre-Rigvedic prelude to the colossal epic of ‘Mahabharata’, is the intriguing story of Yayati, an ancestor of the Kaurava princes and the emperor of Aryavarta, and Devayani, his wife and the daughter of sage Shukracharya. The book narrates how the demon princess Sharmishtha became Devayani’s servant and then her rival; and why Yayati had to ask his children to make the ultimate sacrifice — to give up their youth for him. The ancient couple were also parents to Yadu, who gave rise to Yaduvansha, from which Krishna descended.

A deeply-researched peek into an ancient tale, ‘Devayani’ takes you on a journey through infatuation, lust, jealousy, rage, betrayal, love and wisdom. It is published by Garuda Prakashan and makes for a recommended read for those interested in learning Mahabharata’s backstory.

“Yayati and Devayani are remembered today only because they were the forebears of Pandavas and Kauravas many, many generations ago. That was even before ‘Rigveda’ was written. So, in some sense, what has come to us as our culture, scriptures, itihasa, and Puranas started with them,” the author told IANSlife.

Surprised upon a general lack of knowledge about the characters, specifically Devayani, Tekal has lived with them for over two years now. “I am surprised when I realise that many people don’t know her! And pleased that they can discover her through me,” she says.

Speaking about the contemporary relevance of the colloquially-articulated book, Tekal says: “Human emotions are constant. Despite the momentous change that must have occurred through the millennia that separates Devayani’s time from today, people still feel the same today as they did then. I know people relate to these characters as though they are contemporary from the comments and feedback I have received from my readers.”

Adding,”I discovered Puranas while writing the book. I had the impression that Puranas were a bunch of old stories that are anachronistic. But I found to my delight that there are many stories instructive to the modern reader. The book, ‘Devayani’ is cast in a contemporary idiom and is eminently relatable.”

What are the characters’ key takeaways for the author?

“The highlights of the characters as I see it are, first and foremost, they are all human, with all the human foibles and weaknesses. That said, there is a core of values and grace that ennobles them all. Devayani is unfailingly loyal and true to her own feelings. She has constancy, and she goes on against all odds.”

Yayati also has human failings. He wants to be loved. He seeks love from Devayani, first, and later, Sharmishtha. Devayani is conflicted, but Sharmishtha loves him back unreservedly. Yayati also wants to do and achieve many things, but all his longings and ambitions are cut short when he loses his youth. He begs his children for youth, which no father should do in a more forgiving world. But he does, and he is lucky enough to find a son that humors him and gives him what he needs. Yayati confers his kingdom upon his last son because he has taken his youth from him,” Tekal says.

“Sharmishtha is made out to be the epitome of love in popular culture. She is indeed very loving towards Yayati. Yayati is everything she has idealised in a man, and he is taken by her best friend and enemy. Is her love perhaps just a tinge actuated by jealousy and competitiveness? Regrettably, Devayani will never know the answer to that. Sharmishtha knows that Shukracharya has warned Yayati against marrying her. She is overriding prudence, wisdom, and loyalty towards her best friend when she solicits Yayati’s love. And yet, she plays with fate and surrenders to her love. Sharmishtha is a fascinating character study,” she concludes. (IANS)