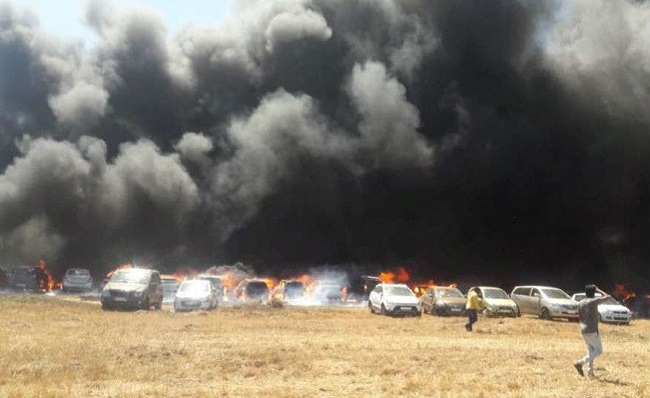 Bengaluru–A massive fire in the parking lot opposite the IAF’s Yelahanka air base, where the Aero India show is underway, gutted about 300 cars on Saturday, police said. No casualties were reported.

“The blaze is likely to have been caused due to dry grass catching fire aided by high velocity winds,” Director General of Police for Fire and Emergency Services M.N. Reddi told IANS.

The fire broke out around noon in the fourth parking lot near the air base’s fifth gate where visitors on the fourth day of the 5-day show had parked their vehicles.

As many as 25 fire tenders and 150 firemen battled for two hours to douse the blaze, first limiting the fire’s spread by a gap created by removing adjacent cars, Reddi said.

“In all, 300 cars were burnt. Fire is fully extinguished now,” he tweeted later.

“Details of damage to vehicles is being ascertained. A court of inquiry has been ordered to investigate the cause of fire,” said a statement by the Defence Ministry.

Thick columns of black smoke were seen billowing soon after the flying display of fighters, helicopters and aerobatics by jet trainers, which began at 10 a.m., concluded by noon.

“An announcement by the organisers at 12.30 p.m. only said it was a small fire, but did not mention about the cars catching fire,” Shashi Kumar, a city-based engineer visiting the expo, told IANS.

As news of the cars being gutted came, several of the visitors began leaving, fearing their vehicles were among the ones damaged even as the aerial display of about 30 aircraft resumed as per schedule between 2 p.m. and 5 p.m.

State transport buses were operated to ferry those whose cars were burnt and were stranded at the venue.

Meanwhile, the Karnataka government deployed a team of surveyors to assess the damage and process the insurance claims by the owners of the burnt-out cars.

“The state transport department will issue duplicate RCs (registration certificate) and DL (driving licenses) to all those who have lost them in the fire,” said Chief Secretary T.M. Vijaya Bhasar in a statement.

The state government has urged the Central government to ask insurance firms to take a lenient view of the incident for claims.

“Alternate parking place has been identified for the show on Sunday,” added Bhaskar.

Terming the incident unfortunate, state Chief Minister H.D. Kumaraswamy tweeted that a help centre was set up at the Yelahanka RTC office and will open on Sunday for issuing duplicate RCs and DLs to those whose cars were gutted.