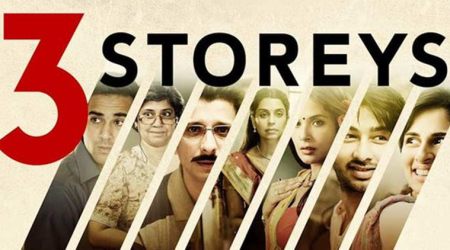 Debutant director Arjun Mukherjee’s “3 Storeys”, with a misleading title, is a craftily narrated tale of characters living in a three-storey chawl in Mumbai.

Set in a middle-class dwelling in the heart of Mumbai, the setting plays a significant part in portraying the social fabric and astutely intertwines the lives of the people living there.

The first act starts on an intriguing note but soon crumbles. The narrative, with its twists and turns, is on-the-nose and proceeds with reckless abandon. And the characters really need to “get it” if the story is to have its triumphant third-act liberation, which they do. Their tales are exciting, absorbing yet cliched.

Renuka Shahane, with prosthetics and gaudy make-up as the Goan, Flory Mendonca is a tad over the top. Though she performs to the best of her ability, she seems to be a misfit in her role. She plays a pampering mother who spares the rod and spoils her son Anthon.

Masumeh Makhija and Sharman Joshi pair as star-crossed lovers; Varsha Joshi a Brahmin girl and Shankar Verma the ace embroider, who land up living in the same building. Their on-screen chemistry is palpable.

Similarly, debut actors Aisha Ahmed and Ankit Rathi as Malini and Sohail make a cute pair caught in an inter-religion love story. Their romance, though underplayed, creates a ripple and you root for the two.

Among the others in significant roles are Himanshu Malik as the bachelor police officer Ganpat, who lives alone and Richa Chadha, the seductress-cum-narrator. Though wasted in miniscule parts, they have their moments of on-screen glory.

The film, mounted on a moderate scale, is technically sound. Will Humphris’ camera work is good in parts. His frames capture the locales and emotions sharply, but some of his frames are shaky and the lighting a tad poor.

Clinton Cerejo’s music blends well with the narrative and elevates the viewing experience.

Overall, an intelligent viewer would initially dismiss the film as a lazily penned plot with banalities and plot-holes galore, but then the writers cheekily and astutely wrap up the film… At some points, it makes you say, “Ah, I did not see that coming.”

And, if you are in a good mood, you will leave the film on a positive note or else you will feel cheated for investing in the characters that were just a figment of one’s imagination.

Nonetheless, climb the “3 Storeys” and find out for yourself. (IANS)