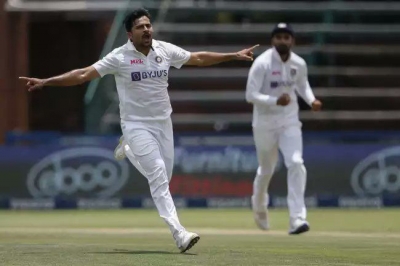 Johannesburg– Riding on a sensational bowling performance by Shardul Thakur (7/61), India bowled out South Africa for 229 in their first innings on Day 2 of the second Test match at The Wanderers Stadium, here on Tuesday.

With this, South Africa, who bowled out India at 202 in their first innings on Day 1, took a lead of 27 runs.

The bowling figures of 7/61 by Shardul is the best ever by an Indian bowler in South Africa and he got a standing ovation from the support staff and Indian coaches while walking back to the pavilion.

Apart from Thakur, Mohammed Shami picked two wickets while Jasprit Bumrah got one. Keegan Petersen (62) and Temba Bavuma (51) were the top run-scorers for South Africa.