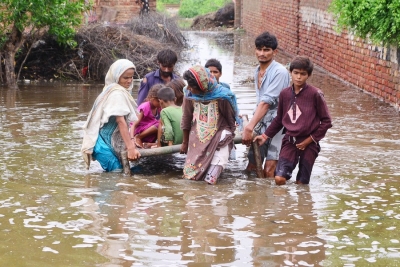 Islamabad–Pakistan Climate Change Minister Senator Sherry Rehman on Monday said the World Bank has estimated a loss of $40 billion to Pakistan’s economy as a result of the damage caused by recent cataclysmic floods, the media reported.

Pakistan has been lashed by unprecedented monsoon rains this year which killed 1,700, devastated two million homes, and put a third of the nation underwater, Geo News reported.

Taking to Twitter, Senator Rehman said that Pakistan has appealed to the estimated damage to the infrastructure, crops, houses and roads is much higher. She added that the World Bank report suggests that about nine million Pakistanis will be forced into poverty due to the floods.

Speaking about the water-borne diseases being spread in the flood-hit areas of Pakistan, the minister said that the health crisis in the country is now intensifying.

She continued to say that the government has to work on the rehabilitation of the flood affectees and their return to their areas, Geo News reported.

The PPP leader urged the international community to help the victims during the humanitarian crisis.

Last week, a World Bank report said Pakistan’s poverty rate is expected to rise between 2.5 and 4 percentage points as a direct consequence of the floods.

Loss of jobs, livestock, harvests, houses, and the closure of schools — as well as spread of disease and rising food costs — threaten to put between 5.8 and 9 million in poverty, it said.

The World Bank said inflation in the country is set to stand at 23 per cent for the financial year 2023. (IANS)