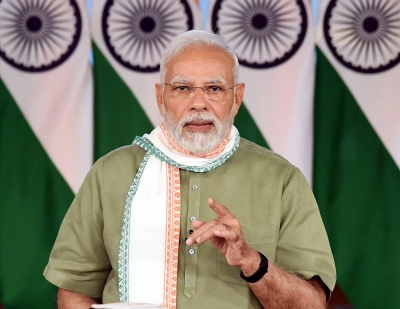 Jamnagar (Gujarat)–Prime Minister Narendra Modi on Monday said that inflation in the country is much lower than that in developed countries.

“Compared to developed countries, inflation is quite low, for example the British are witnessing the worst inflation in the last 50 years, Americans are facing highest inflation of the last 45 years, interest rates are very high… compared to those countries, the nation’s inflation is low because buoyant economy, our country’s economy is very vibrant,” he said at a event in Jamnagar, where he laid the foundation stone and dedicated projects worth Rs 1,448 crore in the district.

He appreciated the demolition work carried out along the coast by the Gujarat government.

He recalled the services of the erstwhile Jadeja dynasty to society and the country, noting how then ruler Digvijaysinh Jadeja gave shelter to Polish children during World War 2, because of which India-Poland relations are strengthened.

About the oil refinery and oil economy of Jamnagar, he remarked that every citizen would be proud of the fact that crude oil is refined on this very land. Modi also said that the double-engine government of Centre and the state has continuously worked for the industrial and infrastructural development of the state. (IANS)