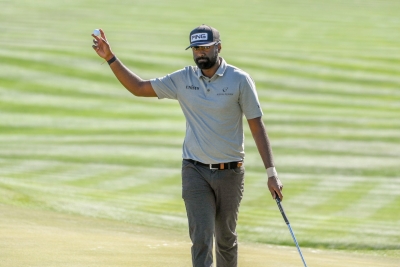 Tokyo– Sahith Theegala, the Indian-American, who took the PGA Tour by storm last season with a series of superb performances in his rookie year 2021-22, is ready for the new challenge. He makes his first appearance in Japan, which is closer to India, where his parents were born and brought up.

Theegala, always gung-ho about anything new, said, “It’s been incredible. I flew out of Houston Saturday morning, got here Sunday early. Spent all day Sunday night in the city, got to explore. Japanese food is one of my favourite foods and I’ve eaten so much great food already.”

About the tournament, Zozo Championship, which he has come to play in Japan, Theegala, coming straight from the Pro-Am, added, “The golf course is incredible, too. I feel kind of at home honestly because I think the rough and the fairways are some sort of Zoysia or kikuyu, so it feels like I’m playing golf on the west coast of the United States. Even the greens. So, I feel very comfortable on the golf course as well. I think ZOZO’s a great job of running the event, too. It feels like a very selective big event.”

Theegala has barely spent any time here in Japan but is already in love with the country. He laughed and said, “I don’t want to leave (Japan). I’m already counting the days until we leave because I don’t want to leave. The people have been great, like the whole culture and so much else.”

While he is enjoying Japan right now, Theegala, also spoke about India, where his parents, grew up in Hyderabad.

Asked, what it would mean to play in India, he said, “I would love to play in India. Honestly, I’ve never brought my clubs to India. I’ve been there at least 10 times. I went a lot when I was younger, but since I got to high school, I’ve only been twice and both times I didn’t bring my golf clubs. I was only there for a little over a month in high school the first time, and then in college I went for my cousin’s wedding and I was only there for two weeks.”

“I played golf one time with a rental set. I think I played the (Hyderabad Golf Association) course around Golconda Fort in Hyderabad. I haven’t played any of the great courses there and I know golf has been really big recently there. Yeah, but I definitely would love to go there and see some of my family again and play golf.”

On what he is looking forward to after a great season, Theegala added, “I have really no expectations even from last year’s really good year. Just going to try to keep getting a little bit better. And the main thing I think I mentioned was just trying to stay as healthy as possible. It’s a marathon, not a sprint. Yeah, just try and keep learning and stay healthy. Golf’s crazy, the game comes and goes. You’ve just got to play well when it comes.”

Meanwhile, two-time Major winner, Colin Morikawa feels he and the other PGA Tour players will have to overcome the strong local challenge if they want to win the ZOZO Championship at the Accordia Golf Narashino Country Club this week.

The US$11 million tournament returns for its fourth edition, and third time in Japan, with 2021 Masters champion Hideki Matsuyama seeking to cheer the home crowd with his successful title defence.