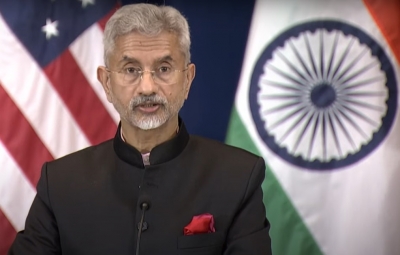 New Delhi– External Affairs Minister S.Jaishankar on Monday said that due to the “Western countries’ preference for the military dictatorship in the neighbourhood”, India has a substantial inventory of Russian-origin weapons.

He said this during a joint press meet with his Australian counterpart Penny Wong in Canberra.

Jaishankar, who is on a visit to Australia, said this in response to a question by an Australian journalist, who asked him whether India will reduce its reliance on Russian weapons and rethink it’s relations with Russia owing to the Ukraine conflict.

“We have a substantial inventory of Soviet and Russian-origin weapons. And that inventory actually grew for a variety of reasons. You know, the merits of the weapons systems themselves, but also because for multiple decades, Western countries did not supply weapons to India, and in fact, saw a military dictatorship next to us as the preferred partner,” Jaishankar said.

He was referring to the Cold War era when the US preferred supplying weapons to Pakistan, which was in the 1980s being ruled by military dictators.

The External Affairs Minister further said that India and Russia have a long-standing relationship that has certainly served New Delhi’s interests well.

“We all in international politics deal with what we have, we make judgments, judgments which are reflective of both our future interests as well as our current situation. And my sense is, in terms of this current conflict, like every military conflict, there are learnings from it, and I am sure my very professional colleagues in the military would be studying it very carefully,” Jaishankar said further.

Last month also Jaishankar, during a joint press conference with US Secretary of State Antony Blinken, had said that India has a right to choose according to what protects it’s national interests, in terms of weapons it wants to purchase. (IANS)