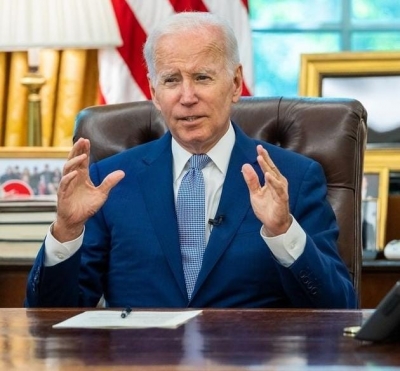 Washington– Just a week ahead of the November 8 midterm elections in the US, President Joe Biden has urged Americans to unite in opposition to “political violence” and warned that “we cant take democracy for granted any longer”.

In a televised address to the nation on Wednesday evening from the Union Station in Washington D.C., the President said: “As I stand here today, there are candidates running for every level of office in America — for Governor, for Congress, for Attorney General, for Secretary of State who won’t commit to accepting the results of the elections they’re in.

“That is the path to chaos in America. It’s unprecedented. It’s unlawful. And it is un-American.”

In his address, he blamed his predecessor Donald Trump, whom he did not name, but referred to as “the defeated former President” of “cultivating a lie that has metastasized into a web of conspiracies that has already resulted in targeted violence”, reports CNN.

“This intimidation, this violence against Democrats, Republicans and non-partisan officials just doing their jobs, is the consequence of lies told for power and profit, lies of conspiracy and malice, lies repeated over and over to generate a cycle of anger, hate, vitriol and even violence.

“In this moment, we have to confront those lies with the truth, the very future of our nation depends on it. American democracy is under attack because the defeated former president … refuses to accept the will of the people,” Biden added.

The President also made sure to note that most Americans, and even most Republicans, would not resort to violence, adding that those who would have outsized influence.

“I believe the voices excusing or calling for violence and intimidation are a distinct minority in America,” CNN quoted the President as saying. “But they’re loud and they are determined.”

Responding to Biden’s address, Republicans argued that he was trying to distract Americans from his low approval ratings and the country’s soaring inflation, reports the BBC.

Taking to Twitter, Republican Minority Leader Kevin McCarthy said: “President Biden is trying to divide and deflect at a time when America needs to unite – because he can’t talk about his policies that have driven up the cost of living. The American people aren’t buying it.”

This week, a Reuters/Ipsos opinion poll found that half of Americans believe voter fraud is a widespread problem, even though such cases are extremely rare.

According to CBS News, out of 595 Republicans running for state-wide office, just over half, 306, have raised doubts about the 2020 presidential election.

In the upcoming elections, all 435 seats in the House of Representatives and 35 of the 100 seats in the Senate will be contested.

The results will determine the 118th US Congress.

In the Senate, the Democrats and Republicans split 50:50 with Vice President Kamala Harris holding the edge for the Democrats with her tie breaking vote.

In the House, Democrats have a wafer-thin majority of 220 seats and Republicans 212, with three seats vacant.