Gulshan Grover: Playing negative characters is like therapy for me

Mumbai– Gulshan Grover’s foray into the OTT space has been much talked about. The iconic ‘Bad Man’ of Hindi cinema was recently seen on SonyLIV’s ‘Your Honor 2’ as Gurjot Pannu, a charismatic mogul with his share of secrets.

Over the years, the actor has made a mark for himself by playing negative characters, and he believes playing such roles act like therapy for him.

The actor says, “Playing negative characters doesn’t affect me, in fact they purify me. It’s like therapy or a detox treatment. In many spiritual remedies, they say when you are sad, cry it out. You should take it out of your system. Similarly, for me, playing negative roles has been like therapy. It cleanses me completely (sic).”

He adds, “After shooting, I am calmer and relaxed. Many actors claim that when they play negative roles they carry it even after the shoot. I don’t understand that; it’s the opposite for me.”

Sharing his experience of playing Gurjot Pannu he said, “My main motive is to make things tricky and unpleasant for the other characters. From industry to industry, my connection and brand image as a villain have remained strong and ‘Your Honor 2’ on SonyLIV feels like the right show to enter the OTT sector as the ‘bad man’.”

Apart from ‘Your Honor 2’, the actor was also recently seen in Disney+ Hotstar’s demonetisation drama ‘Cash’ along with Amol Parashar, Smiriti Kalra and Kavin Dave, where he yet again played the antagonist, who is on a pursuit of his Rs 5 crore that get caught up in the chaos of demonetisation. 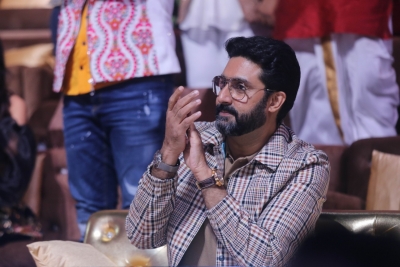 Abhishek said after looking at the performance of Rajshree, who is often compared with Lata Mangeshkar on the show, that she reminds him of being compared with his father.

“Rajshree, whenever I have got the chance to watch the show, I’ve seen people compare you to Lata didi. It actually reminded me about how people compare me with my father and ask me how I feel about it.”

According to him Amitabh Bachchan is a great actor in the industry and this is what he says to everyone making these comparisons. “My answer to them is that there’s no greater actor in this film industry than Amitabh Bachchan and if I’m being compared to him, I am sure I must have done something good.”

“Similarly, your voice has a different kind of magic like Lata ji and that’s why people are comparing your voice with her. I feel you should always take this as a compliment,” he concluded.

‘Sa Re Ga Ma Pa’ airs on Saturday and Sunday on Zee TV.

Anushka reacts to PC roasting Nick Jonas: How good are you at this

Anushka took to her Instagram stories and heaped praises on Priyanka. Anushka re-shared a post by her ‘Dil Dhadakne Do’ co-actor and applauded her.

The ‘Rab Ne Bana Di Jodi’ actress wrote: “How good are you in this @priyankachopra!!(hearts emoji).”

In the short clip, Priyanka is heard saying: “Hi everyone. I’m honoured and so thrilled actually and tickled to be here tonight to roast my husband, Nick Jonas, and his brothers whose names I can never remember. I’m from India a country rich in culture, music and entertainment. So clearly, the Jonas brothers didn’t make it over there.”

She then went on to joke about the age gap between her and Nick.

Priyanka said: “Nick and I have a 10-year age gap. Yes, we do. There are many 90s pop culture references he doesn’t understand and I have to explain them to him. Which is fine because we teach each other. We teach other things. He showed me how to use Tik Tok for example. You know, and I showed him what a successful acting career looks like.”

Speaking about Anushka, she has two films in the pipeline. The actress will be seen in Navdeep Singh’s ‘Kaneda’, and a biopic of cricketer Jhulan Goswami.

Anushka was last seen in the film ‘Zero’ in 2018. She produced the web series ‘Paatal Lok’ and the film ‘Bulbbul’ for OTT last year.

Priyanka Chopra to hubby Nick Jonas: I love you

Mumbai– Amid rumours of having troubles in their marital life, Indian actress Priyanka Chopra and Nick Jonas shared a romantic post stating that they feel “grateful” to have each and have put an end to all gossip.

Priyanka and Nick shared a loved-up picture on the occasion of Thanksgiving. She wrapped her arms around Nick in the picture and is lovingly looking at her husband. It seems that she leaned in for a kiss.

“So much to be grateful for. Friends, family. I love you @nickjonas. Happy thanksgiving to everyone celebrating,” Priyanka wrote as the caption.

Nick shared the same picture and wrote: “Happy thanksgiving everyone Grateful for you @priyankachopra.”

Priyanka and Nick got married in dual ceremonies at the Umaid Bhawan Palace in Jodhpur in 2018. (IANS)