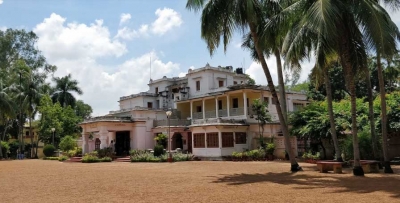 Kolkata– A Unesco delegation visited Visva-Bharati to assess technical details on the basis of an application by the authorities to include the national university established by Rabindranath Tagore in the World Heritage Site list.

The seven-member team, comprising members of two advisory bodies including the International Council on Monuments and Sites (ICOMOS) and the International Union for Conservation of Nature (IUCN), which was supposed to visit Santiniketan between September 28 and October 3, arrived here on Monday and will stay for two days.

Representatives of Archaeological Survey of India (ASI) also accompanied them.

Before visiting the traditional places of the university, the team had a meeting with Vice Chancellor Bidyut Chakraborty at the central office

Later, the team visited the Visva-Bharati traditional places of worship including the Kanch Mandir Upsana Griha, Santiniketan Bari (the first building that housed Debendranath Tagore and his family after Bhubandanga was bought by him), Uttarayan complex, Kala Bhavana, Sangeet Bhavana and all other structures built by Rabindranth Tagore as part of his dream university.

A nominated property is independently evaluated by two advisory bodies mandated by the World Heritage Convention: the ICOMOS and the IUCN. They provide the committee with evaluations of the cultural and natural sites nominated, respectively.

Earlier, IANS had reported that a delegation team from Unesco is likely to visit Santiniketan in October to assess the possibility of inclusion of this prestigious university of national repute into the World Heritage Site list.

This is the Union Culture Ministry’s second appeal to the UN body to secure the status for Santiniketan.

The Ministry had in 2010 also appealed for the same.

The original application in 2010 had been pushed to the “tentative” list after a technical evaluation of the site by the ICOMOS.

It was then pointed out that development pressure on the campus had tampered with the site’s heritage value.

The ASI with the help of the University prepared a fresh dossier and submitted it to Unesco. An ASI team, led by its Director General Vidya Vidyanathan, had camped at the university in January to prepare the report, finding answers to the questions that were raised the last time.

External heritage conservation experts were roped in to assist them.

Accordingly, renovation of various traditional buildings and invaluable sculptures scattered all over the university is underway and the central government sanctioned about Rs 3 crore for this purpose.

A total of 24 buildings and architectural renovations that have the potential to be collectively listed as World Heritage are going through entire renovation. The varsity authorities have also formed their own committee for this purpose.

“We are very excited. The place is historically important, and it deserves the honour. We hope that this time the Unesco World Heritage Committee makes their decision in favour of the university,” the officials said. (IANS)

Friday Namaz offered at Gurugram ground, Hindus do Hawans and Arati at the same spot

Indian government to re-examine advisory on efficacy of Ashwagandha

Average number of children per woman in India declined from 2.2 to 2