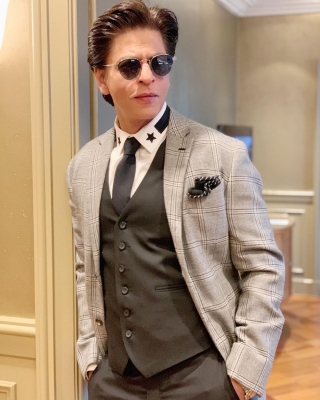 Mumbai– Aryan Khan’s troubles with the Narcotics Control Bureau (NCB) may have dragged Shah Rukh Khan into the kind of spotlight he would have liked to avoid, but he himself is no stranger to controversies.

Stories about him date back to 1992, when he was just another new face with starry aspirations in Mumbai. That year, Shah Rukh Khan picked up a fight with a film journalist and got arrested for causing disorder in the office of the magazine that employed the target of his fury.

In an incident reported by Anupama Chopra in her book on SRK and which he himself later recounted in his interview with David Letterman, the then fledgling actor was upset that the journalist had written about an intimate scene involving Deepa Sahi and him for Ketan Mehta’s acclaimed film ‘Maya Membsaab’. Sahi, incidentally, is Mehta’s wife.

“I’m gonna take off your clothes and make you stand naked with me. Would you find that funny?” SRK, in his Letterman interview, recalled having said to the journalist and then going on to create a scene, which ended up in his arrest. Seeing the state of the lockup inside the Bandra police station, Shah Rukh made peace with both the journalist and the cops.

In the intervening years, SRK had the Samajwadi Party baying for his blood after he declared (jokingly, he said later) at a public function, pointing to the then leading political operative, Amar Singh, that he could see ‘darindagi’ (evil intent) in his eyes.

Singh, who was then the influential general secretary of the Samajwadi Party, and was close to Amitabh Bachchan, among many other public figures, did not find it funny and vowed to humiliate SRK at an opportune moment. Matters came to a head and Samajwadi workers landed up outside SRK’s home.

His daugther, Suhana, was so shaken by the incident that she started crying and this upset Shah Rukh so much that he went to town with his feeling. He said in an interview with an afternoon tabloid, “I am a Pathan and I am very, very, very, very protective about my family.”

In 2012, after Kolkata Knight Riders beat Chennai Super Kings in the IPL final, an allegedly drunk SRK got into a scuffle in full public view with a security guard at Mumbai’s Wankhede Stadium. In his defence, the superstar said the guard had stopped Suhana from joining the celebrations on the ground, but then he aggravated matters by verbally abusing the guard and officials of the Maharashtra Cricket Association (MCA), in full view of the television cameras around him.

A social media influencer promptly demanded that Shah Rukh be booked under the Juvenile Justice Act for using abusive language in the presence of children. The Mumbai Police filed an FIR and MCA banned his entry into the stadium, but after six years, the cops found no substance in the charges against SRK.

Even before the IPL took off, SRK got into the crosshairs of the Shiv Sena in 2010, when he said he found it “humiliating” that there was pressure on him to not bid for Pakistani cricketers for the Kolkata Knight Riders. The Pakistanis, he said, were the best T20 players in the world.

It provoked the late Bal Thackeray, Shiv Sena supremo and father of the present Maharashtra Chief Minister, Uddhav Thackeray, to threaten to prevent the screening of his just-released film, ‘My Name is Khan’. The Bollywood fraternity jumped to SRK’s defence and evetually the controversy died down.

When on the subject of ‘My Name is Khan’, how can we not remember the three occasions when SRK, not unlike the son of the film’s protagonist who gets killed because of his Muslim surname, was held back for questioning by immigration officials in US airports.

It happened for the first time in 2008 at Newark’s Liberty International Airport, then in New York City in 2012, and finally in Los Angeles in 2016. Of course, Shah Rukh was let off with profuse apologies on each occasion, but, as he tweeted in 2016, “to be detained at US immigration every damn time really really sucks”. Apparently, a namesake of the superstar was on the lookout list of the US Immigration and Naturalisation Service.

As if the constant glare of controversy were not enough, even his palatial addresses have been attracting avoidable bad publicity. Mannat, SRK’s six-storey bungalow overlooking the Arabian Sea from Land’s End, Mumbai, has been dragged to courts by activists, unsuccessfully of course, for violating heritage laws as well as the coastal regulation zone rules.

Even his opulent beach-front mansion at Alibaug, the preferred address of Mumbai’s rich and famous, has been embroiled in controversies. In 2018, it was attached by the Income-Tax Department, but the action was vacated by an appellate tribunal.

The company that purchased the land, which was registered in the names of SRK’s mother-in-law and sister-in-law, was fined Rs 3.09 crore for being in violation of the Bombay Tenancy Act, which does not allow the conversion of agricultural land for non-agricultural uses.

It has been a red rag for green activists as well, who allege that it also violates the Coastal Regulation Zone provisions that disallow any construction within 500 metres of the high tide line.

L’affaire Aryan Khan may have come as a jolt that SRK may take a long time to recover from, but a row here and a controversy there have been constant companions of the superstar for as long as he has been in the public eye. (IANS)