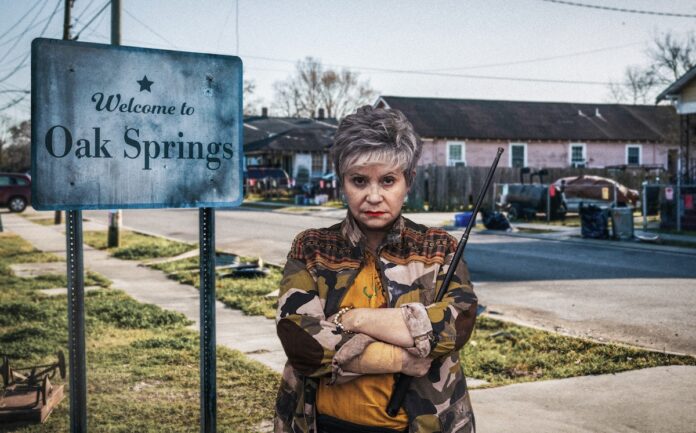 ‘Bingo Hell’ is an off-beat film that blends horror and satire in a relatively unique way. Set in a distant locality named Oak Springs, the narrative follows Lupita (Adriana Barraza), an elderly, loud-mouthed busybody who fiercely protects her neighbourhood from gentrification.

Oak Springs had seen fabulous days, but now, with every other house in town up for sale and long-term businesses closing down, Lupita and her peers are fed up with the constant home-purchase offers from developers.

When Mr Big (Richard Brake) an ill-defined, mysterious supernatural stranger, comes into Oak Springs with his big paying bingo hall, Lupita finds that her long-time neighbours and residents of the town dying under grisly circumstances, and she suddenly discovers that gentrification is the least of her problems.

She takes the bulls by the horns when she realises that Mario, who is already conspicuous in his absence all day, has sold his place, and when she goes over to his house finds him dead in mysterious circumstances.

The scares set in after a mysterious limousine makes its first appearance, but by then the audience is already pulled into the narrative just like Lupita’s investigation of the uncanny events in town. The horror in the film perfectly alludes to the ’80s with slime and cinematography that captures psychedelic lighting.

Adriana Barraza as Lupita is a likeable character. With her blabber-mouth and into everybody’s business demeanour, she is the typical, good-hearted neighbourhood lady. Much like the neighbourhood she loves, there is a quality about her that will make you accept her.

L. Scott Caldwell as Dolores, who is stuck housing an absent son’s trashy, ungrateful wife (Kelly Murtaugh) and a grandson (Joshua Caleb Johnson) who is drifting towards delinquency and all the others in supporting roles have their moments of on-screen glory.

Richard Brake as Mr Big is truly a frightening figure. His clownish get-up and mannerisms are terrifying. As the narrative progresses, he becomes more monstrous in appearance and develops like a classic horror film villain.

Overall, while the characters and the setting provide a comforting sense to those who have grown up in small towns or similar surroundings, the comic and macabre aspect of the screenplay appears undernourished and murky. Moreover, the film ends on a feel-good factor which reveals, “As long as we are together, it does not matter where we go.” (IANS)

Review: ‘Spencer’ is more impressive than ‘Diana’ of 2013