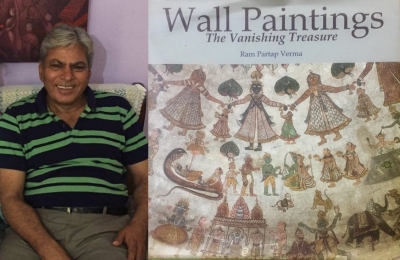 New Delhi– He may have left his dusty hometown of Bhiwani in Haryana decades back, but there is something about the city that refuses to part with him.

The many grand havelis there, slowly getting consumed by time and the almost magical wall paintings executed since the 18th century, have over the years become an integral part of artist Ram Partap Verma, precipitating him to write a book and make a documentary film on them.

To bring forth the fast vanishing heritage seldom taken notice of by authorities and art historians, the artist recently released his book and documentary film “Wall Paintings: The Vanishing Treasure”.

Stressing that his journey of four decades as an artist was rooted in that town, he says, “For years I have been working on these projects without any grants or patronage. Frankly, many of the paintings you see in the book cease to exist now as several havelis have been torn down to make way for modern houses. Sadly, a few of them, with pigments on the wall paintings still intact that still exist, are in a pathetic state owing to little interest shown by the owners and the state.”

Talk to him about the fact that in Europe, not just the government but locals too understand the importance of heritage in their localities and communities, and do the needful, and the artist says, “Well, that’s hardly the case in this country otherwise we would not be seeing couples inscribing their names on monuments across cities, no?”

For someone who developed a fascination for the arts during early childhood — seeing his mother paint images relating to snake worshiping and Shakti on the walls of their house, he says that the movie and book is his tribute to the hometown that sowed the seeds of art deep within him.

The artist, who as part of his research spent several months in those havelis, decoding the history of the painters, understanding their styles, deciphering the motive behind the use of particular colours and the social impact of that time on their work, says, “One can easily see the influences of different cultures and time periods on the wall paintings. Honestly, it is tough to trace the evidence of any art school in this region.”

Elaborating on his research for the book and film, he says that it was neither easy to find the material or records of the painters.

“It meant extensive travels across the country and accessing different libraries, not to mention, elaborate interviews with locals and owners who could be traced,” says Verma.

“Interestingly, many painters who made the wall paintings of Hindu mythologies were Muslims. This speaks of the composite culture that existed centuries ago,” he adds.

Decoding these paintings on the walls of havelis of where primary colours like ochre, indigo, and green as secondary have been used, the artist says, “All I hope for is that the remaining wall paintings should be preserved by art foundations and the government.” (IANS)

A practical playbook on self-management for young professionals

‘Inactivated virus vaccine against Covid-19 was the perfect choice’

Of a family’s fall from grace and journey to redemption