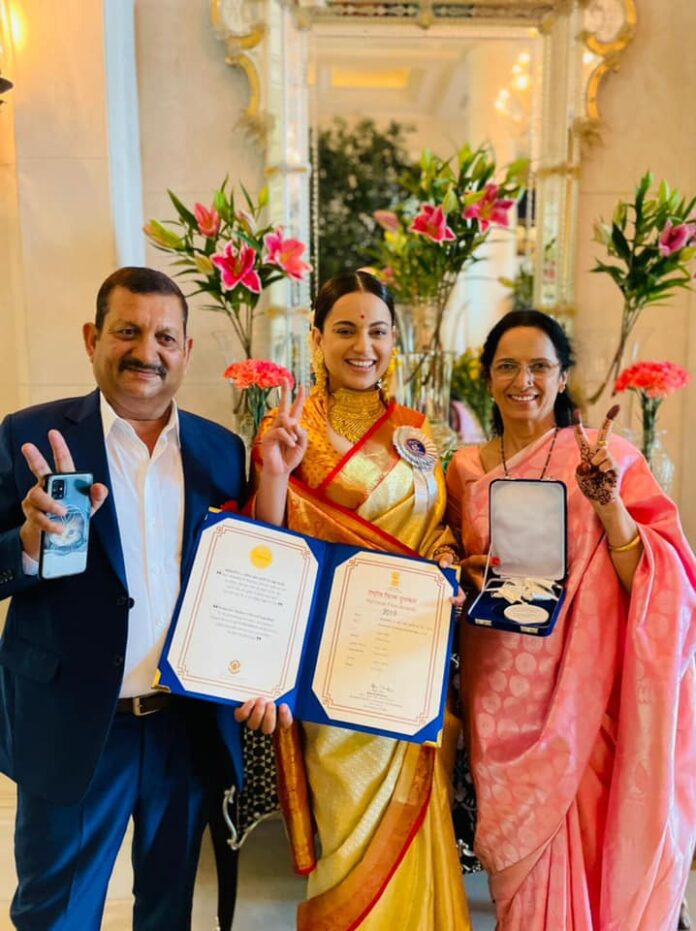 New Delhi– October 25, 2021 will always be a memorable day for actor Kangana Ranaut as she received her fourth National Film Award today.

Kangana was awarded the Best Actress Award for her performances in ‘Manikarnika: Queen of Jhansi’ and ‘Panga’. For the special occasion, she chose to wear a traditional silk saree. She even shared several pictures of her look on her Instagram account before walking up to the stage to receive the award.

“All set to receive the highest honour for an artist in the country today …. National Award,” she captioned the post.

This is Kangana’s fourth National Award. Earlier, she won Best Supporting Actress for her role in ‘Fashion’ and Best Actress Awards for ‘Queen’ and ‘Tanu Weds Manu Returns’.
After receiving the prestigious award, Kangana took to the photo-sharing application to thank her parents for being her support system.

“We all grow up with a deep desire to be worthy of our parents love, care and sacrifices…After all the troubles I give my mummy papa such days seem to make up for all those mischiefs ..Thank you for being my mummy papa I wouldn’t want it any other way,” she wrote.

Alongside the thank you note, Kangana posted a string of images of her with her parents from the ceremony.

In the pictures, Kangana, her father, and her mother can be seen flaunting the Rajat Kamal that the actor got at the 67th National Film Awards ceremony. (ANI)