John Abraham: Will push aside everything to work with Mohit Suri again

Mumbai– Actor John Abraham has wrapped up shooting for the upcoming film ‘Ek Villain Returns’. This is the second time he has collaborated with Mohit Suri and said that he would push aside everything to work with the filmmaker again.

John said: “Shooting for ‘Ek Villain Returns’ has been a seamless experience. This is the first time since my debut film, in which coincidentally Mohit Suri was the first AD and now he’s the director, that I have come back to the same school of filmmaking. Mohit didn’t need to tell me much. He would tell me a word and I would get it.”

“I am a guy who hates night shoots and rain. But in this film, I enjoyed doing everything. There were no complaints. Everything felt too good to be true. I will push aside everything to work with Mohit again.”

The action hero called a “beautiful experience” working on the sets of ‘Ek Villain Returns’.

“We have got a great film out. I am so proud of it and this I say without even seeing a single frame of it. Congratulations to all of us. The team has been fantastic, production and direction teams have been very good. If I may say so, we have a super hit on our hands.”

In a similar vein, Suri added: “From being an assistant on John’s first film to now directing him in ‘Ek Villain Returns’, it has been a long destined dream which has come true. I was destined to work with him since my first movie. John and I’ve both started our careers in the same company and I always wanted to work with him and finally, I did get that opportunity. I’ve had a great experience on and off the set while working with him on ‘Ek Villain Returns’.”

Jaipur– Bollywood couple Saif Ali Khan and Kareena Kapoor are chilling out in Jaisalmer, and the doting mother on Thursday posted an adorable picture of her younger son, Jeh, doing what looks like the yogic ‘mountain pose’ (‘tadasana’), also knowns as the ‘pike position’. 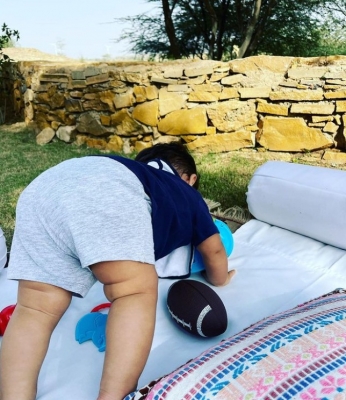 Earlier on Wednesday, Kareena had posted a selfie in sportswear on Twitter. It shows her doing workouts and carries the caption ‘Desert Run’.

Her posterior-view picture of a playful eight-month-old Jeh, who was some time back the target of vicious trolling, is captioned: “Downward Dog [emojis showing appreciation] Yoga runs in the family you see [emojis] #8 months Pike position #Mera Beta [heart emoji].” Kareena’s sister, Karisma Kapoor, reacted lovingly with the words: “Our ‘jaan’ (life).”

Hyderabad– Telugu ‘power star’ Pawan Kalyan is one of the most popular actors. With an unmatched craze around his movies, all his movies are being hyped right from the time they are announced.

The actor is currently busy with back-to-back movies and there are a couple of movies that are expected to be announced officially. It is reported that Pawan Kalyan is to sign a movie under Surender Reddy’s direction.

Pawan Kalyan would wind up the current movies, then work on his political agenda before he kickstarts this movie with Surender Reddy, which is tentatively titled ‘PSPK29’.

So, the makers are keen to rope in actress Sakshi Vaidya, to play the female lead in ‘PSPK29’. Though there is no official confirmation, it appears like the makers are progressing with the casting formalities and other pre-production work.

‘PSPK29’ will hit the floors once Pawan winds up the shooting of ‘Bhavadeeyudu Bhagat Singh’, a Harish Shankar directorial.

Mumbai– Bollywood star Ranveer Singh, who has been lobbying with authorities to declare Indian Sign Language (ISL) as the country 23rd official language, and signed a petition in support of the cause, has lauded the steps taken by India to make textbooks and other educational material accessible for deaf children in sign language.

In a statement, Ranveer said that it was “a huge step forward in a truly inclusive society”. He added that “inclusivity leads to accessibility” and that he was “hopeful of what is to come in 2022” because the country’s leaders are “identifying with this movement”.

“The National Education Policy 2020 is a progressive move that is much needed by the deaf community and the nation and I commend this big step. This is an important start to equalise the playing field for the 70 lakh-plus citizens of the deaf community,” Ranveer said. (IANS)