Mumbai– Actress Gia Manek who is seen as ‘Gopika’ in ‘Tera Mera Saath Rahe’ talks about playing a completely contrasting role of ‘Radhika’ in the show. ‘Gopika’ is soft spoken and innocent on the other side ‘Radhika’ is fearless and bold. This is her double role in the daily soap and she is excited on portraying distinct characters on-screen.

In the show it shown that ‘Gopika’ is facing a lot of issues in putting her point. But ‘Radhika’ will become her voice.

Gia shares about her double role in the show and how both are different: “‘Radhika’ is fearless, intelligent and a confident women and she will do what is needed to be done ferociously for the well-being of people that matter to her. Her character will be completely in contrast to ‘Gopika’. She will be introduced in a retro look and will have a more confident and courageous approach.”

Mumbai– It’s been over two years since Hrithik Roshan appeared on celluloid. Fans have been waiting to witness his next performance on the silver screen and it seems like their wishes will be soon granted.

Earlier, Hrithik had made an announcement about getting back to shooting schedule for the upcoming film ‘Vikram Vedha’. And now, it’s learnt that the actor has recently wrapped the first ever action sequence from the film.

The news came out when a few stuntmen from the film’s set shared pictures of the sequence wrap. The stunt sequences seem to be quite crazy as suggested by the stuntmen. Talking about the same, a stuntman posted on his instagram as he wrote, “Wrapped up the first action sequence of Vikram Vedha. A big ‘Thank you’ to @parvez.shaikhh sir for this opportunity. Wouldn’t have been possible without you ?? @hrithikroshan.”

Another stuntman posted, “First craziest action sequence have done (sic).!! Cheer’s To @hrithikroshan @parvez.shaikhh @stuntindia1 and all the stunt boys.!!”

‘Vikram Vedha’ is a Hindi remake of the runaway Tamil hit of the same name which was released in 2017. While the original action thriller starred R. Madhavan and Vijay Sethupathi, the Hindi version will see Hrithik Roshan squaring off against Saif Ali Khan.

Ranveer Singh posts quirky picture and the Internet has a field day!

Mumbai– Ranveer Singh is the ultimate quirk king. His fashion choices that are best defined as outrageous have time and again amused the audience and have made him the apple of several designers’ eyes. This time around too, the ‘Bajirao Mastani’ actor donned a blue Gucci tracksuit and naturally, the Internet exploded! 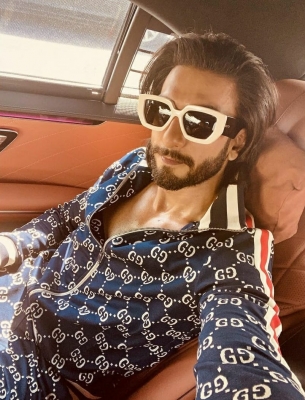 Ranveer took to his Instagram as he shared a picture of him with a caption, “Tuesdays,
Never-lose days.”

He paired his outfit with a pair of funky shades and a thick stubble enhancing his jawline. His picture and caption left many wondering including his wife, Deepika Padukone, who put a comment, “Means???” below the picture.

Ranveer has often exhibited his liking for the luxury brand Gucci as his pictures in the brands’ outfits keep going viral inciting a barrage of reactions from the netizens. The most recent ad of Cred even went a mile forward and portrayed Kapil Dev acting like Ranveer, where the former India skipper wore some outlandish clothes much like the actor.

On the work front, Ranveer is filming for Dharma Productions’ ‘Rocky Aur Rani Ki Prem Kahani’ where he will be seen opposite Alia Bhatt. Apart from this, the Diwali release ‘Sooryavanshi’ will see him in an extended cameo appearance. His next ’83’ is queued for a year-end release too.

Mumbai– Bollywood actor Rajkummar Rao shared his feelings after watching the film ‘Agneepath’, especially when Amitabh Bachchan’s character ‘Vijay’ died in the movie. He will be seen as a special guest along with Kriti Sanon in the ‘Shaandaar Shukravaar’ episode of ‘Kaun Banega Crorepati 13’.

Rajkummar shares: “As a child when I was watching ‘Agneepath’ and when the movie ends where your character, ‘Vijay’ dies. Sir, after the film got over, I ran into my room and I covered my face with the pillow and started crying loudly.”

“As I was convinced that Amitabh Bachchan had died and I was telling God, ‘How can this happen, please bring back Amitabh Bachchan, God. How can God do this, he can’t die. Then my mother came and told me that this is just a film and it’s not real,” he concludes.

Apart from this Kriti Sanon will be seen going down on her knees to propose to Amitabh Bachchan followed by ballroom dancing.

Hyderabad– Samantha Ruth Prabhu, who had filed a defamation case against a couple of YouTube channels and an individual, is in no mood to rest until she gets things right.

It was reported that the Kukatpally court here had trashed Samantha’s appeal to take legal action against those who she claimed defamed her.

The actress who wanted legal action to be taken against her defamers was asked to seek an apology from them instead. The court had cited that the celebrities share personal details and then file defamation cases, which was not the right thing.

Not ready to take it, Samantha had to bring her advocate in her defence. It is reported that Samantha’s attorney has cited the recent ‘permanent injunction order’ case filed by Shilpa Shetty as the reference point to Samantha’s case now.

After her husband Raj Kundra was arrested in a pornography case, Shilpa Shetty had approached the Bombay High Court. The court passed the permanent injunction order, restricting media outlets from reporting derogatory reports pertaining to her.

Samantha’s divorce announcement came as a shocker to all, after which multiple websites and YouTube channels started speculation related to her personal life and spreading rumours about the actress having affairs with her colleagues.

Richa Chadha on ‘Inside Edge’ character: I’m just the polar opposite of ‘Zarina’

Mumbai– Bollywood actress Richa Chadha, who is playing the character of Zarina in the web series ‘Inside Edge’ that is soon to be out with its third season, says her character is just the opposite of who she is in real life.

‘Inside Edge’ is an Amazon original produced by Ritesh Sidhwani and Farhan Akhtar and created by Karan Anshuman, who is now the creator and showrunner of this series. The third season will be directed by Kanishk Varma.

Richa said, “Zarina is an interesting character and although I am nothing like her in real life, I get how she became the way she did. I am just the polar opposite of Zarina’s character, and this is one of the reasons I have thoroughly enjoyed playing the role immensely. The love for power, fame, money, comes alive in her character and is so real. I am excited about the third season and look forward to audience reviews because I feel Zarina, who has been wronged in so many ways since Season 1, will claw her way back to the person she once was.”

‘Inside Edge’ is a fictional series that follows the trials, tribulations, and triumphs of the Mumbai Mavericks, a fictional T20 cricket franchise playing in the PowerPlay League. The first two seasons have garnered appreciation from the audience. Season three is in the works and will soon be released on Amazon Prime. (IANS)