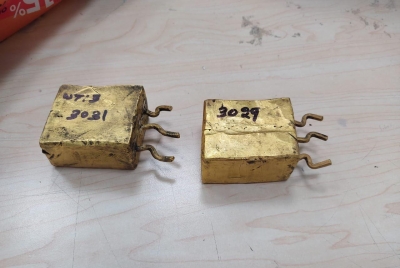 Hyderabad–In one of the biggest seizures at the Rajiv Gandhi International Airport, Customs officials on Tuesday recovered 6.06 kg gold from a passenger who arrived from Dubai.

Two gold bars, of 3 kg each, of 24 carat purity, and worth Rs 2.96 crore, were concealed in two rechargeable lights.

The officials, who searched the baggage of a passenger arriving from Dubai by flight EK 524, found the two emergency lights. On suspicion, they opened the lights and found the bars kept inside the rechargeable batteries.

The Customs officials seized the gold and filed a case of smuggling against the passenger. Further investigations are on, an official said.

The airport has been witnessing a series of gold seizures. Those resorting to gold smuggling are adopting innovative ways to conceal the contraband.

On October 8, 528.2 grams of gold and 28 grams of silver valued at Rs 20.44 lakh was seized from a passenger who arrived from Doha. He had concealed the gold and silver in the face cream boxes in checked-in baggage.

On October 5, Customs officials seized over 1,200 grams of gold in paste form valued at Rs 58.16 lakh from a female Sudanese passenger who arrived via Dubai.

According to officials, the gold was concealed in the undergarments and hand baggage.

In two of these cases, the gold was concealed in undergarments of the passengers while a third passenger had concealed it inside check-in baggage. (IANS)