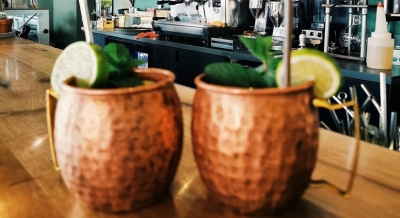 New Delhi– International Coffee Day is here and coffee lovers have been granted a whole day to indulge in all things caffeine, be it morning cappuccinos, evening lattes or midnight mochas. But there’s another way to give your coffee an extra kick; by simply adding a little spirit, you can turn your regular coffee into an enticing cocktail and celebrate the day with something a little stronger other than a regular flat white.

Beam Suntory’s brings you a caffeinated concoction inspired by South India and homemade cinnamon that combines the classics — coffee, whisky, and bourbon!

Across south India, and even in the rest of the country, long before people took to their cappuccinos or lattes, everyone’s cup of coffee in the mornings would be a filter coffee. Made with a combination of coffee beans and chicory, this hot beverage has a distinct taste and aroma and one which is a firm favourite for many.

Add all the ingredients together in a shaker with ice and pass the liquid between the two shakers to mix. Just like how a professional coffee maker would ‘throw’ filter kaapi between two mugs. This will bring in a nice element of theatre into your drink.

In addition to Maker’s Mark and coffee, this recipe is rounded out with the sweetness and spice of creme de cocoa liqueur and homemade cinnamon simple syrup. The syrup lives up to the “simple” in its name and is worth revisiting for use in other recipes. If caffeine gets you easily wired, there’s no need to deprive yourself of this cold-weather classic. Substituting your favourite decaf coffee will work just as well with this recipe.

* Grated chocolate or cinnamon for garnish

Add all ingredients to a mug or Irish Coffee Glass and stir. Top it with heavy cream or whipped cream and garnish with grated chocolate or cinnamon (or both!). To make cinnamon syrup, mix equal parts sugar and water with one broken-up cinnamon stick per half-cup. Bring to a boil. Once sugar is completely melted, remove the pan from heat and let sit for at least 30 minutes. Strain out the cinnamon. The syrup can be stored for up to three weeks.