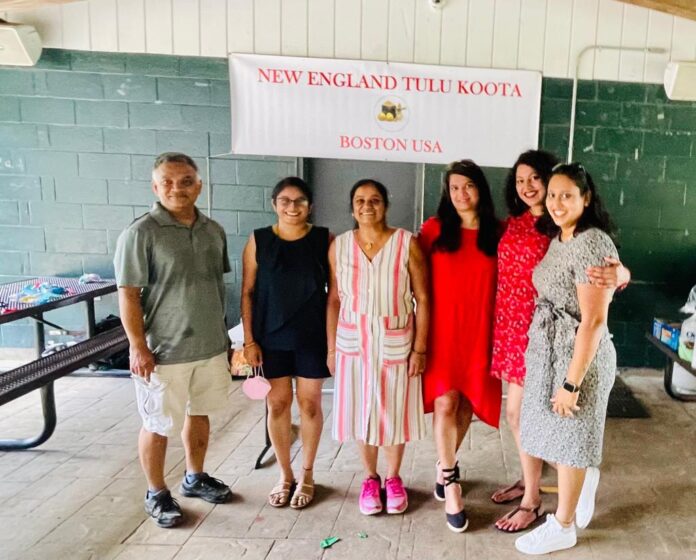 BOSTON–The new team of New England Tulu Koota, known as NETK, for the year 2021-2023 have elected Mohair Shetty Kodavoor as President and Sheela Shetty and Naveen Shetty as Secretary and Treasurer. respectively. NETK also elected Roshni Gopinath, Sahana Alva and Bhavana Jain as Board of Directors.

The new team last month organized “JOKULATIGE” their annual picnic on a beautiful day, just right for a picnic outdoors particularly given the times of social distancing, where all members got together to enjoy the outdoors at Pomps Pond in Andover, MA.

Tulu is a language spoken primarily in Southern Karnataka, centered around Mangalore. The group has Christians, Muslims, Hindus making up this wonderful group with a common bond of language. The group was created primarily to promote this very ancient language that has now been reduced to a dialect, the mode of written communication being Kannada.

The day started with an introduction of all members particularly the new ones, followed by a lunch, cooked and sponsored by the members, all the delicacies of Tulunad (land of the Tuluvas). There was of course, idli sambar/chutney, chicken ghee roast, chicken sukka, veg biriyani and pulao, chicken biriyani, manni, just to name a few. There were enough varieties to suit every palate.

This was followed by live music by Rajesh Pai and Raghu Kinnigoli using the “dibbana” or a special dhol played only in the south for yakshagana and other folk dances. We had our men perform a “pili” (tiger) dance to that, another indigenous folk dance style in South Canara. There were several games organized for the children such as lemon spoon, frog race etc,, the children were excited to win medals and certificates upon their win. There was dizzy run game for the men while the women played musical chairs. Housie (as bingo is known in USA) there was also a game specifically from Tulunad “Taarayi Kutuna” which involves rolling coconuts against one other to break the opponents coconut was played by all. Lots of fun and good cheer, a lot of them stepping out and meeting so many people for the first time in nearly 2 years.

Food did not end with lunch, there were freshly made Mangalore buns, and goli bajji (a bhajia made various flours and curd), all made on site by our wonderful volunteers, and hot masala chai, how could you not have your fill of these favorites that some of us can only get to eat on an occasion like this.

What a wonderful time was had by all, particularly noteworthy this time the committee was primarily made up women, so food was definitely the highlight. Tulukoota of New England gets together other times of the year to celebrate festivals of Tulunad.