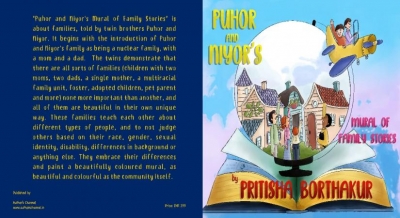 New Delhi– Delhi-based author Pritisha Borthakur is set to release her new book, ‘Puhor and Niyor’s Mural of Family Stories’. The 1,404-word children’s book was put together to address a new kind of societal debacle in the family system. The author says the aim is to teach children that families can exist in different forms, and show them how to accept the diversity in family backgrounds.

The author who named the book after her twin sons — Puhor and Niyor — is a parent who has seen and heard the tales of ridicule and discrimination suffered by many in India and beyond. She says the book is an artistic illustration for kids that details how different families can live and coexist. Whether it’s children with two dads or two moms, children with a single dad or single mom and even multiracial family units, Borthakur’s book teaches love, understanding and compassion towards unconventional families.

Beyond race, gender, colour and ethnicity which have formed the bases for discrimination since the beginning of time, this book aims to bring to light a largely ignored issue. For so long, single parents have been treated like a taboo without any attempt to understand their situations; no one really cares how or why one’s marriage ended but just want to treat single parents as villains simply for choosing happiness and loving their children.

Homosexual parents, a relatively new family system, is another form that has suffered hate and discrimination for many years. Pritisha emphasizes the need to understand that the diversity in people and family is what makes the world beautiful and colourful. ‘Puhor and Niyor’s Mural of Family Stories’ is a firm but compassionate statement against all forms of discrimination on the bases of sexual identity, gender, race and even differences in background.

Written for a global audience, the book is targeted at kids between the ages of five and 10, the reason it is embellished with colourful images of families of different types to appeal to children’s sense of sight and drive home the message at the same time. Borthakur believes children are the best place to start because the ages between five and 10 are the most formative, where little ones pick up habits, beliefs and perceptions.

The Guwahati-born author says, “With this book, I’m not trying to take away the job of parents in forming habits, I simply want to do my part as a parent. It is important that we impart the right values in our kids in a bid to build a better, more inclusive and tolerant global society that is fair to everyone.”

The author’s first attempt at a book was an Assamese poetry ‘Anubhav’, published in 2010.

Set to be published under the label of Author’s Channel, the book is like an adventure; a journey into uncharted territories, untouched subjects and matters long ignored. In her words. “The book takes a critical stand in defense of people in society who have had to undergo severe emotional torture for no cause of theirs. It is a terrible conception to think such people any less of a human just for being different,” says publisher Aruna Naidu.

By September 30, this title, priced at Rs 299, will be available online and in offline bookstores. (IANS)