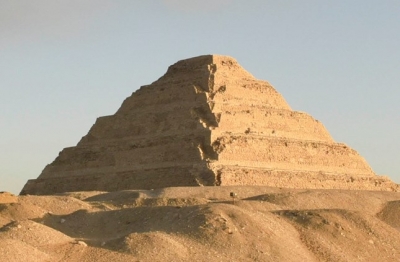 Cairo– Egyptian Minister of Tourism and Antiquities Khaled al-Anany opened the south tomb of King Djoser in the Saqqara necropolis near capital Cairo.

The south tomb is located at the southwestern corner of the King Djoser funeral complex dating to the Third Dynasty, Old Kingdom period, Xinhua news agency quoted Mostafa Waziri, secretary general of the Supreme Council of Antiquities, as saying.

“This magnificent complex is the oldest stone building of the ancient world and it was named the ‘Southern Tomb’ following its discovery by the English archaeologist Cecil Mallaby Firth in 1928,” he said.

“The tomb is composed of an upper level in the form of a rectangular stone building. Its walls are decorated with a series of stone sockets in the form of entrances and exits, crowned by a frieze of cobra heads that symbolize protection and power,” Waziri added.

Meanwhile, the lower level of the tomb represents an entrance towards a ramp leading to the burial chamber, which is located at the bottom of a great shaft with a depth of approximately 31 metres, including a huge sarcophagus made of pink granite and a well.

He added that the well and the sarcophagus are similar to those inside the Step Pyramid.

The restoration process started in 2006 and involved conservation and restoration work of the lower corridors, strengthening the walls and ceilings, complete the interior inscriptions in the tomb as reassembling the granite sarcophagus, according to Waziri.

The tomb will be opened to the public starting from Tuesday. (IANS)