Shah Rukh shared a glimpse of the celebration from his house on Instagram. He shared a picture of Lord Ganesh.

He captioned the image: “May Lord Ganesha’s blessings remain with all of us until we see him again next year…Ganpati Bappa Morya!!!”

Shah Rukh celebrates Ganesh Chaturthi every year with his family and keeps sharing sneak-peeks from the festivities on his social media with his fans and followers.

On the work front, SRK is busy shooting for his next ‘Pathan’, an action-thriller which also stars Deepika Padukone and John Abraham. The film is directed by Siddharth Anand.

This is Samantha-style ‘girl bonding’

Hyderabad– Actress Samantha Akkineni uploaded a series of pictures on her social media account on Monday. Her party time with actresses and friends Trisha Krishnan and Keerthy Suresh giving major goals of ‘girl bonding’ to her fans.

The pictures gave a glimpse into how her weekend was spend. It also featured her pet dogs in a tussle game over a slipper.

While one post was a selfie of Samantha, Trisha, Kalyani Priyadarshan and fashion designer Preetham Jukalker, the other picture was of Samantha and Keerthy pouting with roses tuck behind their ears.

Samantha has given a miss to this year’s SIIMA awards. Her husband and actor Nani received her award for Best Actress in ‘Oh Baby’ in her stead.

After IT raids, Sonu Sood defends himself, albeit vaguely

Mumbai–Days after the Income Tax Department swooped down on Sonu Sood and his business associates, the Bollywood actor came out with a reaction here on Monday, devoid of any reference to the action against him. 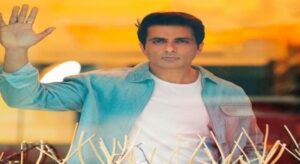 “You don’t always have to tell your side of the story. Time will,” he said, starting philosophically and ending poetically, with a dash of patriotism.

In a tangential reference to the Sood Charity Foundation being targeted by the IT Department, he declared: “Every rupee in my foundation is awaiting its turn to save a precious life and reach the needy. … In addition, on many occasions, I have encouraged brands to donate my endorsement fees for humanitarian causes too, which keeps us going.”

Explaining his silence over the past days as IT sleuths conducted searches in at least 28 premises belonging to Sood and his business associates all over India, sniffing for evidence of tax evasion, the actor said: “I have been busy attending to a few guests hence was unable to be at your service for the last four days. Here I am back again in all humility. At your humble service, for life.”

Giving a poetic twist to his predicament, he added: “Kar Bhalaa, Ho Bhalaa, Antt Bhale Ka Bhalaa (be good, do good, the end is always good for those who are good). My journey continues. Jai Hind.”

Sood’s reaction came after the IT Department pointed the needle of suspicion – without naming him – at alleged tax evasion of around Rs 20 crore by him and other questionable deals with his business partners pegged at another Rs 240 crore.

In an unusual official statement, the department’s list of questionable actions on the part of the actor mentioned unutilised funds in the Sood Charity Foundation, fake contracts and circular transactions with his business partners-companies, diversion of funds through bogus accommodation entries’ to evade taxes, and re-routing them back for making financial investments or buying property.

Mumbai– Actor Anshuman Jha, whose directorial debut ‘Lord Curzon ki Haveli’ had been postponed indefinitely due to the pandemic, says the delay helped him understand the script better.

This black comedy thriller, starring Arjun Mathur, Rasika Duggal and Parambrata Chatterjee, is set in London and was halted due to the pandemic.

Anshuman said: “I believe in honesty and controlling the controllables. It will happen when it is meant to.”

He believes that this delay will only help in the betterment of the nuances in the storyline.

Anshuman added: “The delay has helped me understand the script a little more and further work on the narrative. I believe that everything happens for a reason and this delay is for the best as we wouldn’t have liked to get stuck in the UK. Everyone’s health is of maximum importance. And this film is meant to be in London.”

Anshuman is busy with various projects. He will be next seen in an action-packed film ‘Lakadbaggha’.

Mumbai– Actor Ali Fazal has shot for an upcoming short film, an untitled science fiction movie which was recently filmed in Mumbai for four days.

The film is written and directed by ‘Cargo’ director Arati Kadav. Her previous short was ’55 km/sec’, which starred Richa Chadha in the lead.

“Collaborating with Arati has been an amazing experience. I have to say that I really had a lot of fun shooting with her and I think she’s immensely talented in what she does,” Ali said.

He added: “We shot the entire film in the span of just four days in Mumbai. I wish I could share more about the short film, but let’s wait for the official announcement to be made first.”

Details about the film are still under wraps.

Alia posted a slew of pictures on Instagram from the birthday celebrations. The first picture featured Mahesh while the other one had Ranbir, Alia and Pooja posing with Mahesh.

The rumoured couple were seen twinning in black ensembles as they smiled at the camera posing alongside Pooja and Mahesh.

Talking about her upcoming slate of work, Alia has ‘Gangubai Kathiawadi’, ‘RRR’ and ‘Brahmastra’. She turned producer with her film ‘Darlings’ and will also be seen in ‘Rocky Aur Rani Ki Prem Kahani’.

Ranbir currently awaits the release of ‘Shamshera’. He will be seen sharing screen space with Alia in ‘Brahmastra’ and also has ‘Animal’ lined up. (IANS)