Kanika is known for delivering some superhit Bollywood numbers like ‘Baby Doll’, ‘Chittiyaan Kalaiyaan’, ‘Desi Look’ – among many others.

Talking about the song, Kanika said, “You can’t outsmart the heart. Romantic love isn’t a general state of being, it is pulled out of us by a special, unforgettable person. I wanted to share my sincerity and authenticity about this specific love. On an intuitive level, people will always feel it if it is real. I am romantic by nature. I know this, the rest the song speaks for itself.”

The song ‘Jhanjhar’ has been written, composed and sung by Kanika Kapoor. The authentic, specific and inspired song has her collaborating with Deep Money on the music and Nitin Gupta on the lyrics. The song is presented by Zee Music Company.

Mumbai– Bollywood actor Chunky Pandey will be seen as the special guest on ‘Zee Comedy Show’ during this Sunday’s episode, while Nikki Tamboli will be seen as a guest comedian for just this weekend. 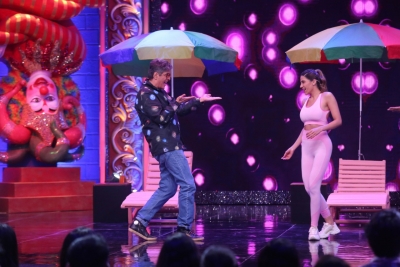 During the show Chunky Pandey can also be seen shaking a leg with Nikki Tamboli on the song ‘Saat Samundar Paar’. The entire performance is entertaining for ‘Laughing Buddha’ Farah Khan and the audience as well.

Nikki said: “I am a fan of Chunky Pandey, so it was great dancing with him. I had come on ‘Zee Comedy Show’ as a guest comedian when Chunky ji was a special guest. We wanted to do something fun, so we did an impromptu dance act. I truly had a great time on the show.”

Chunky Pandey can be seen in the show sharing interesting anecdotes and witty responses as he appears as a special guest. Moreover, Nikki will bring her own sense of humour within the ‘Team Hasaayenge’ that includes 10 comedians as she is appearing as a guest comedian.

Not only will she be performing on dance numbers but also do a special act as a model roaming in Goa. She also went on to request Chunky to join her on stage so that she could shake a leg with the actor.

New Delhi– The Sushmita Sen-starrer ‘Aarya’ has been nominated at the 49th International Emmy Awards in the ‘Drama Series’ category.

Sushmita said: “It is surreal to know that ‘Aarya’ has been recognised globally amongst the Best Drama series in the world and to be nominated at a platform as prestigious as the International Emmy Awards is phenomenal.”

She added: “I am overwhelmed with the love and faith viewers across the world have put into our labour of love and want to thank each one from the bottom of my heart for the encouragement.”

Helmed by director Ram Madhvani, the Hotstar Specials show succeeded in weaving a narrative around a dynamic woman who gives her all to save her kids and family. It marked the debut of the former beauty queen in the digital space.

Madhvani said: “It’s a feeling of pride and humility and true happiness to have been nominated for the International Emmy Awards. Congratulations to the entire team and cast of Aarya for their immense support, belief, and love. This nomination truly validates the full team’s hard and dedicated work.”

“We are extremely proud and honoured to be nominated at one of the most esteemed global award platforms that recognise creativity, talent and storytelling at its best,” said Gaurav Banerjee, President & Head – Content, Disney+ Hotstar & HSM Entertainment Network, Star & Disney India.

Radhika Madan: When we see a love story it just feels like home

New Delhi– Radhika Madan is gearing up for the release of her upcoming romantic film ‘Shiddat’. The actress has talked about what makes a love story a popular genre universally.

“Somewhere down the lane we love Love and that is something we all connect to and we all want in our life. The reason we do our job is because we are finding love in that,” Radhika in a candid chat told IANS.

The 26-year-old actress added: “Every aspect has love and I think that’s what hits the chord in our hearts. So when we see a love story it just feels home and that’s the reason maybe people are attracted to it.”

It will stream on Disney+ Hotstar from October 1. (IANS)