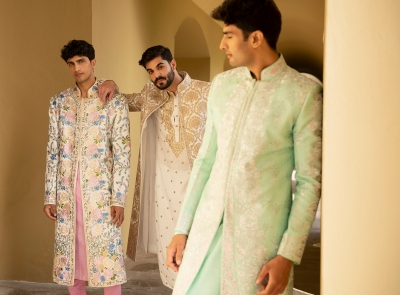 New Delhi– Day two of the Fashion Design Council of India’s (FDCI) digital edition of the India Couture Week 2021 was a celebration of love, fashion and cinema, with designers Siddartha Tytler, Suneet Varma and Gaurav Gupta showcasing their collections.

Designer Gaurav Gupta’s ‘Universal Love’ was inspired by the expanse and the grandeur of the cosmos. His larger than life film, ‘Mirror of the Sky’ shot at the beautiful Taj Faluknama, Hyderabad, perfectly encapsulated the mood of the collection which celebrated love in its many avatars. Concept lehengas, hybrid gowns and glamorous styles in space greys, pale pinks and bold blues were the highlight of his collection. For menswear, the designer opted for tuxedos, jackets, flared trousers and bandhgalas in subtle blacks, whites and teal. Keeping with modern design techniques, Gupta’s latest couture offering is perfect for the new-age bride and groom.

A self-confessed non-conformist, Tytler’s creations were anything but the ordinary. The Delhi-based designer didn’t shy away from his signature structural silhouettes and sharp cuts for his debut couture outing ‘Ambrosia’. With ivories and shades of gold in focus, voluminous anarkalis, lehengas, sherwanis and gigantic skirts dominated the collection. Cotton silks, silk organzas and georgettes were in focus with splashes of beadwork, ruffles, laser cutting and quilting.

The evening also saw Suneet Varma present his fashion feature, ‘Noor’, known for his elegant pastels, intricate embroideries and statement blouses, his collection comprised of lavish lehangas and ghararas, elaborate gowns and finely tailored sherwanis. While the opening and closing scenes of the film focused on the sponsor rather than the collection, the rest of the presentation featured a bride reminiscing her wedding while walking us through the many ensembles of Varma’s couture collection. (IANS)

Your guide to a luxurious and sustainable wedding

Are you a modern Indian bride?