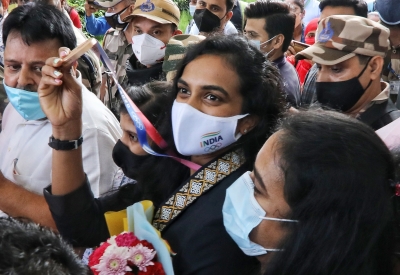 New Delhi– People lined up outside the arrival lounge at the Indira Gandhi International Airport and cheered and clapped as PV Sindhu, the first Indian woman to win medals in successive Olympic Games, walked out on Tuesday.

It felt like the badminton champion was being given a spontaneous guard of honour by the public, which was left mesmerised by her performance in Tokyo.

The cheering and clapping by airport staff, fellow passengers and bystanders continued till she walked into a waiting car and disappeared. Autograph-seekers pushed and jostled as they tried to get a glimpse of India’s biggest badminton star.

Sindhu returned to a grand welcome from badminton enthusiasts on Tuesday afternoon from Tokyo where she had beaten world No. 9 He Bingjiao of China in straight games on Sunday to claim the bronze medal, adding to the silver she had won five years ago in Rio de Janeiro.

She is the only Indian woman to win medals in successive Olympics and is likely to remain so at least for the next three years.

While she was accorded a warm welcome by her parents, PV Ramana and Vijaya, and Badminton Association of India (BAI) officials including its general secretary Ajay Singhania in the airport lounge, outside a large number of people waited with dhols to welcome the best woman shuttler the country has produced.

“I am very happy and excited of course. The PM called and congratulated me and of course Ajay Singhania is here and everybody from BAI came. Very thankful to everyone for supporting me and encouraging me,” she told a waiting group of officials and journalists.

She was whisked away by the BAI and Sports Ministry officials as she had programmes lined up for the entire evening. (IANS)