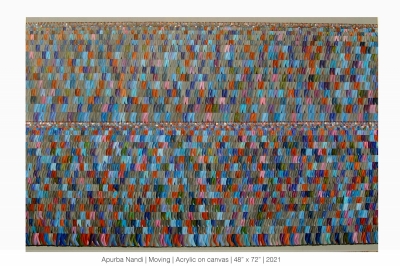 New Delhi– ‘A Parade of Uncertain Destinations’, a solo art show by a Mumbai-based artist Apurba Nandi, showcases through paintings the artist’s observations of people navigating through the city of Mumbai. 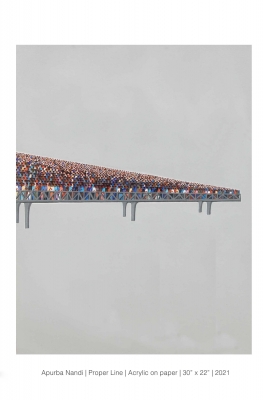 On view till September 11, the show is presented by Delhi-based Palette Art Gallery and is both physical as well as virtual on the gallery’s website.

According to the artist, he, “was intrigued by this landscape when (she) was in the process of being part of a city like Mumbai.”

She says: “I was waiting for Mumbai to absorb me. Waiting become an act of ‘looking’ at this city. At times plainly looking at unknown people is cathartic. I kept looking at people till they got reduced into a pattern of heads, pattern of hands, of eyes, of sound; the sound that becomes a common humming. Placing one figure after the other, the work morphs into a formation of people. For me these formations become an enquiry into the order of society and at the same time it enquires our own sense of existing in the social fabric.”

A note on the exhibition says that the images of the multitude in Nandi’s solo show captivate the voyage of a mysterious collective of faceless masses, towards uncertain destinations.

“Multitude becomes the important protagonist of his new body of works. We witness the flow of innumerable human bodies on the canvas, concealing the markers of caste and religion, refusing to be categorised into any social and religious strata.”

“Instead of representing the plight of individuals or small groups of people, the artist uses the collective body as a significant visual element in his works to comment on contemporary urbanism. Nandi aesthetically translocates these mundane visuals of human confluence into a new painterly landscape,” it says.

This solo show of Nandi presents an excellent opportunity to ask the following significant questions on contemporary urbanism: How could we aesthetically negotiate the urban chaos? How do contemporary artists think about the multitude and its agency? Nandi’s concerns align with the inquiries of the long lineage of artists from both the modern and contemporary periods, who have attempted to grasp the fleeting experience of the city, it adds. (IANS)